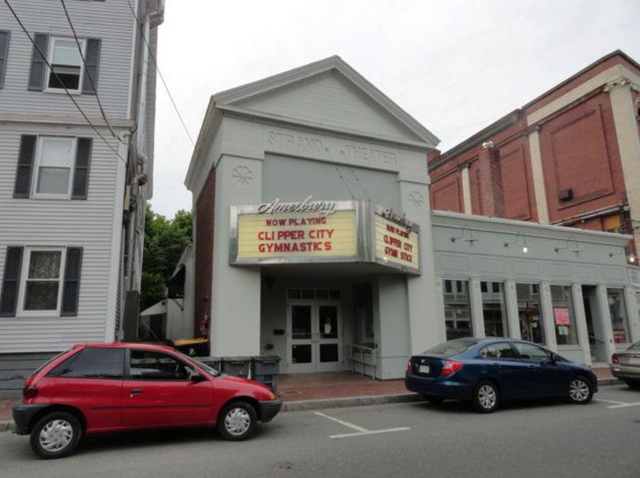 The Crown Theater was opened in 1912. In 1919 it was renamed Strand Theater. The "Amesbury" Theater still has its marquee, with the gymnasium sign lit where the movies were once advertised. I could only peek inside, but the terrazzo floors looked great and the auditorium was obviously in one piece, if now denuded of its seats.

Amesbury, Mass. looks to be an up and coming town. Its downtown was once derelict and depressed after the mills closed, but the area has undergone a yuppie conversion and looks just great. Someone could make a few dimes reopening this theater as a theater, despite the competition of "Stage Two Cinema Pub" with "the largest screen in the valley" literally in the Amesbury’s backyard.

The “Amesbury” theater is actually the Strand Theater Building. The building was built in 1912 as the Crown Theater, renovated in 1919 to the Strand, and renovated again in 1947. 2004/2005 we are the architects for the building facade renovation project completed March 2005 as part of the CDBG program.

The “new” facade has brought back the stucco historic to the earlier facades and has refurbished the marquee which bears the name “Amesbury” as well as the tenant.

We tried to upload a photo, but could not. Anyone interested in the project should contact us:

Is it possible to change to live performances in the theatre?

If you provide your contact information I would be happy to connect you with the facility owners.

Is this the one the real estate gentleman was referring to with regards to your other posting? Have you seen this one? Your thoughts?

In the 1927 Film Daily Yearbook, the Strand in Amesbury is listed as being open 6 days per week and having 600 seats.

As the Strand, the theatre is listed in the 1942-43 Motion Picture Almanac as being part of the Warner Brothers circuit of New York. At that time, it was one of 16 theatres in Massachusetts controlled by Warner Brothers, only 3 of which actually carried the name “Warner Theatre”.

The Strand in Amesbury is listed in the 1928 Film Daily Yearbook as part of the Boas Circuit of Boston. Boas operated 22 movie theatres at the time, some of which (like the Amesbury) later went over to Warner Brothers.

Anyone interested in this beautiful theatre please feel free to reach out. I have an interested party now that appears willing to restore this iconic theatre built in 1912. That said, I’ve had other investors looking to take the space and modify it for other purposes. It just seems a shame for a this jewel not to be used for it’s original purpose.

Jntapalis, I would have great interest in renovating and re-opening this as a dinner theatre film house. Please reach out if building is still available.

The Crown Theatre was one of two houses listed at Amesbury in the 1914-1915 American Motion Picture Directory. The other was the Town Hall, located on Friend Street.