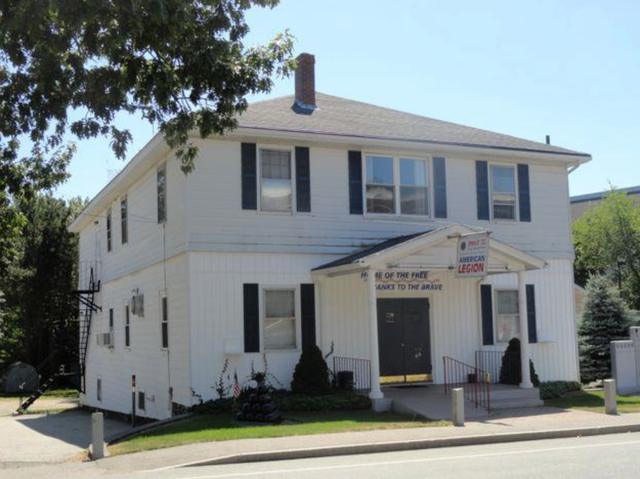 Recent conversations with John M. Holman, of Hampton NH, revealed some now lost theaters in the Hampton NH area. This is an article he wrote, about the Grange Hall/Winter Barn Theater/Hampton Theater/American Legion Post. It still stands today…

In addition to the Olympia Theatre, the Casino Theatre and the Barn Theatre at the Beach, Hampton was privileged to have another theatre which opened in the Grange Hall (now the American Legion Post #35 hall at 69 High Street) on Friday, October 2, 1942 as the "WINTER BARN THEATRE".

The owner and manager was Bernard ("Bernie") H. Stevens assisted by his wife, Van. The new theatre featured 2 shows each evening, at 6:45 pm and 8:45 pm (except Sunday). Matinees were Tuesday and Thursday at 3:30 pm and at 2:30 pm on Saturdays. The admission for the matinee was 17 cents for children and 25 cents for adults. The evening shows were 39 cents for all seats, with tax included. This was the price policy for the year 1942.

The movie theatre operated under the name of the WINTER BARN THEATRE through the next year, then decided to remain open all year round under the name of THE HAMPTON THEATRE. The "new" Hampton Theatre held its grand opening on Friday, October 8, 1943 with the first show at 7:00 pm, matinee on Saturday, at 2:15 pm and the theatre was closed on Tuesday.

A popcorn stand was set up downstairs in the hallway and was managed by "Jackie" Cate, now Mrs. Mario Fusco of Boynton Beach, Florida. The popcorn was 10 cents a box and was "French Fried". Quoting from a communication from "Jackie", she says, "I ‘graduated’ from popcorn to box office and even learned to run the projection booth when I was commuting to Burdett College in Lynn, Mass. in 1946. It was a lot of fun. I helped out when needed until I was married in May of 1949. If I remember correctly, we were getting 50 cents for adults and 25 cents for children in the evenings at that time." The theatre was upstairs and even had 2 ushers during the performances. (Your writer was one of those ushers, along with John Berry, Hampton’s Tax Collector at that time.)

The bill often showed two features, along with the "latest" news, a cartoon and a "cliff hanger" serial, labeled as "Selected Short Subjects" in The Hampton Union’s movie ad. They also showed "trailers" (previews of coming attractions) and there was always a Saturday afternoon matinee at 2:15 pm.

Quoting from The Hampton Union edition of April 5, 1951: "After nearly eight and one-half years of operation, the Hampton Theatre closed its doors Saturday night, March 31, 1951, for the last time.

Mr. Bernard H. Stevens, owner and manager of the theatre, stated this week that a gradual falling off of attendance due primarily to the number of television sets in this area, was responsible for the theatre’s closing. Mr. Stevens first opened the theatre in the Grange Hall in the fall of 1942 as the Winter Barn Theatre, but the following summer, decided to remain open all year round under the name of The Hampton Theatre.

During their eight years in Hampton, Mr. Stevens and his wife, Van, who worked along with her husband to keep the business going, have won many friends among the youngsters as well as the adult population of this area for the clean and wholesome type of shows that they made available.

And so with the closing of the Hampton Theatre in the Grange Hall on March 31, 1951, came the end of an era until many years later, when Hampton Cinama opened its doors with 4 theaters-in-one (later, with 6 theaters-in-one) next to The Galley Hatch Restaurant. The only things missing from the new theatres of today, are the "Selected Short Subjects", which included the latest world news, cartoons and the Serials, such as "Custer’s Last Stand" in 12 chapters. Now there was a "cliff-hanger"! And, of course, popcorn is no longer 10 cents.

How many of our readers' can still remember the old "New" Hampton Theatre in the Grange Hall back in the 1940’s and early ‘50’s?

"How much was that "French Fried" popcorn, Jackie? Only 10 cents?? What a bargain!"

"Thank you for NOT talking during the movie!"

The Theatre Historical Society on-line archive has the MGM Theatre Report for the Hampton Theatre; it’s Card # 487. But there is no information on it at all aside from an undated exterior photo. I suspect that the photo may have been taken about 1949-50.