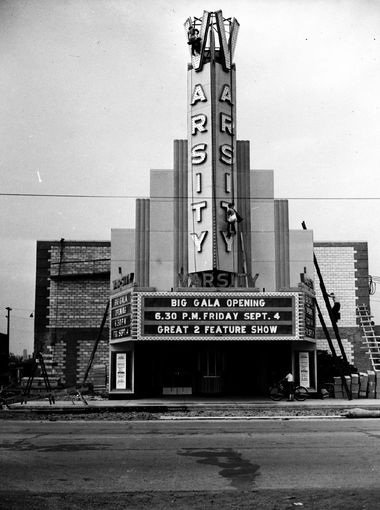 Designed by Hector Payne in 1936 (the same year his Norwest Theatre opened on Grand River Avenue) in Art Deco style, the Varsity Theatre sat just under 1,500 and opened September 4, 1936.

It was originally operated by the United Detroit Theatres chain.

In 1960, seats removed from the Fisher Theatre when it was being remodeled from a movie palace to a venue for live performances, replaced the Varsity’s original seating.

After closing in the 70s, the Varsity was used as a church for many years, but has since been razed.

Correction: The actual address was (is) 17121 Livernois.

The Varsity Theater was demolished in the early 1980’s to make way for a McDonald’s. The theater was located one building north of the intersection of Livernois & McNichols, kitty-corner from the main campus of the University of Detroit (which I attended from 1979 – 1985, during which the theater was torn down). The building was tightly boarded up and the ‘Varsity’ marquee remained until the end – there was no evidence that it had ever been used as a church.

In 1963 this was run by Detroit Consolidated Theaters.

The September 4, 1936, issue of The Film Daily had this item in its Detroit column: “Russell Chapman, manager of the Madison for United Detroit Theaters, is to manage the new Varsity Theater opening this week.”