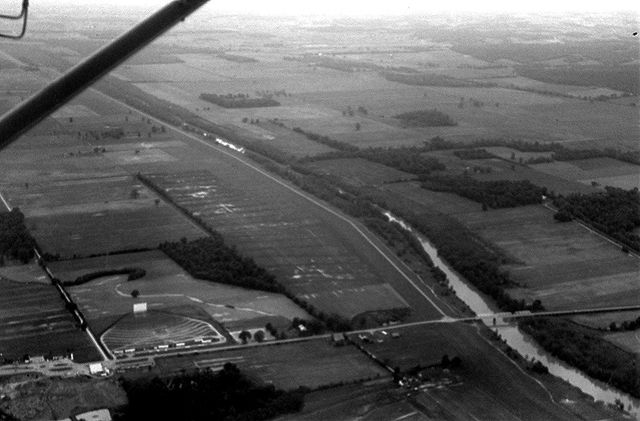 The Montgomery Drive-In opened April 10, 1955, featuring the 1954 adventure “The Black Knight” with Alan Ladd, Peter Cushing and Patrick Troughton. The second feature was the 1954 drama “Cain Mutiny” with Humphrey Bogart, José Ferrer, Van Johnson and Fred MacMurray. It was owned and operated by Bernice Montgomery and later on his son Morris Montgomery. The parking ramp could hold 200 cars. If one would look at the 1960 aerial view, it appeared as if could park about 350 cars. It could have possibly been enlarged at a later date. It featured a ‘Fairyland’ for the children and it had an electric merry-go-round, swings and other playground equipment.

On September 22, 1965, the original wooden screen tower which was made from redwood shipped from Oregon was blown over. The new screen tower was made of concrete panels cast locally and supported by heavy steel beams. The theater finally closed in October 1971.

On June 27, 1980, Morris’ son and his mother reopened the Montgomery Drive-In. It was only open on the weekends. It was in operation until October 9, 1981, when it closed for good. The screen tower is still standing and the parking ramp is used for storage. Morris commented that the drive-in showed very few first-run movies. “The big movie theaters in Cape had contracts that embargoed those kinds of shows for at least 14 days". Modern day television and air conditioning also took its toll on the drive-in theater business.

Notice that the Home of the Stars Drive-In opened four days later on the 14th of April?

the screen is still standing!

Per Cape Girardeau TV station KFVS, the former Montgomery will reopen in October as the Rock ‘N’ Roll Drive-In. From photos on its Facebook page, they’ve done a lot of work to clear the viewing field and take the foliage off the sturdy concrete screen.