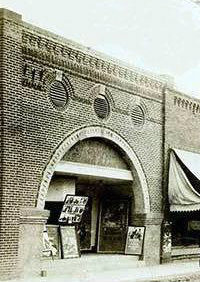 An early theatre, forgotten today, in this small northwestern Wisconsin city of which almost nothing is known, including its exact location on La Salle Avenue. The Majestic Theatre was opened prior to 1941, and continued until at least 1950.

This theater’s exact location on E. Main Street can never be known, as there is no Main Street in Barron. The town’s commercial district lies along E. La Salle Avenue. Google Maps, confused, has chosen to put the pin icon on East Main Street in Cameron, a town several miles east of Barron.

A vintage postcard for sale on eBay (link, probably unreliable) shows the Majestic’s barely readable sign on the north side of La Salle Avenue just east of 4th Street.

Google’s Street View of the location shows a wide, single story building with a modern front, but satellite view shows that the facade covers two separate buildings. I suspect that the Majestic was in the left one, closer to 4th Street. From the postcard, it looks like this building once had a second floor and the building covered by the other half of the modern facade once had three floors. The entire space was probably gutted when the upper floors were removed.

Thank you for your research, Joe, and though this vintage postcard view gives the location as East Main Street, either the street was later renamed or it’s an error of source as there’s currently no Main Street in Barron.

A newer postcard (link, probably unreliable) with cars from around 1960 shows that by then the Majestic and its neighboring building had been combined to house a Ben Franklin 5&10 Cent store. The theater must have closed in the 1950s.

Blurry Google street view makes the signs unreadable, so I don’t know what is in the theater’s building now, but I don’t think the Ben Franklin store has been gone for too many years. This web page, probably outdated, still lists Clausen’s Ben Franklin Store at 411 E. La Salle Avenue. The Majestic’s address might have been a bit lower as it occupied only one of the two buildings that became the Ben Franklin store.