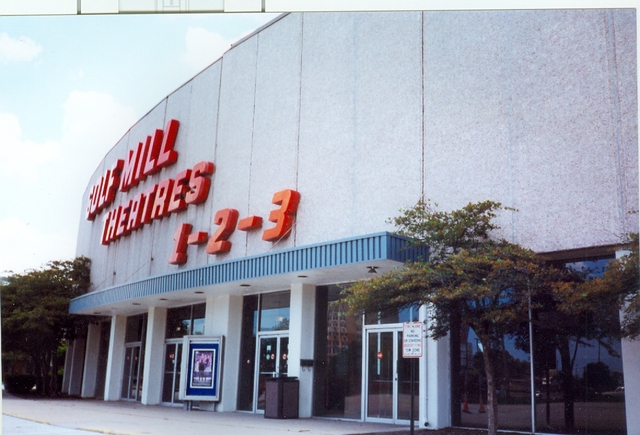 The Golf Mill Theater opened in 1961, two years after the adjacent shopping center of the same name opened. Originally a single screen theater, seating over 1,800, the first film to play the Golf Mill was Jerry Lewis' "The Errand Boy".

Costing nearly $2 million to construct, the Golf Mill Theater was Kennedy-era modern but still had elegant touches, like a long, airy lobby complete with sunken lounge areas with sofas and large metal fireplaces.

In 1969, the large auditorium with its vast 50 by 22 foot screen was twinned and the theater became the Golf Mill I & II.

With both declining attendence due to larger and more modern theaters sprouting up nearby, as well as the declining shape of the Golf Mill in general, Cineplex Odeon, which operated the theater in its last few years, closed the nearly four-decade old movie house in 2000.

In early-2003, the Golf Mill was completely gutted and converted into a fitness center.

There are a few errors in the information section that will hopefully be updated. The Golf Mill had 3 screens, not four. The big house accomodated 1,500. Theater 3 opened in 1973.

Here are a few memories I have of the theater and its crusty owner/manager.

Answers for a few of the questions below;

The person who would speak to Wally Philips on WGN Radio 720 AM was the Golf Mill manager Bene Stein, who also booked the films and had quite a bit of clout in the industry. Bene Stein was an “Old school” manager, when a theater manager had respect and power in the industry.

F & F gave into some of Esseness’s suggestions for cost cutting measures; such as remodeling the lobby to allow for a larger concession stand (in the fall of 1981) which faced the customers as they entered. Prior to this, the concession stand divided theaters 1 & 2 and made cross-overs between the theaters nearly impossible.

Another Esseness suggestion was to to eliminate the dedicated cashier and concession staff in #3 during non-peak business. They would sell the tickets at the box in #1 & 2 and have the #3 customers walk through the lobby to #3 past #1 (which made crossing over very easy).

Another cost cutting measure Esseness suggested was the elimination of the Brinks cash pick-up service. The Finks allowed that cut, so the managers took the cash to the bank every night then.

When the five year agreement was up in May of 1986, the Finks allowed the Golf Mill and the Golf Glen to be included in the Esseness sale to Cineplex-Odeon. Their Morton Grove Theater remained with Morton Fink’s son, Bobbie Fink, who later started up Value Theaters.

I uploaded the grand opening ad from December 28th, 1961 in the photo section for this theatre. You may notice it was “Transistorized”

looks like a most impressive theatre in its day.

As of 1973 when screen 3 was added, Golf Mill had the most seats outside of the largest palaces like the Chicago, Oriental, Granada, and Uptown, with 3200 seats.

My father, Bene Stein, was the manager of the Golf Mill Theatres and I worked as an usher. Here’s some trivia: one of the ushers I worked with in 1965 was Steve Goodman,the wonderfully talented singer/songwriter who wrote among many great tunes “City of New Orleans” and “Go Cubs Go”. It was his first job.

If you are on Facebook Leemstein, here is a great fan page for Goodman. Copy and paste to view.

It’s called “Fans and Friends of Steve Goodman” if the link doesn’t work.