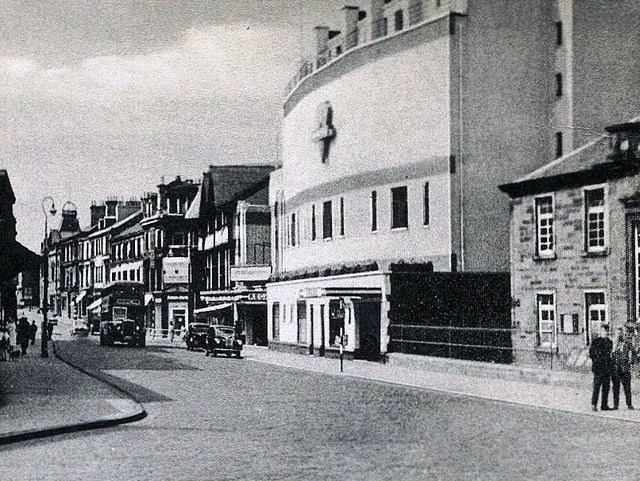 Located in Falkirk, Sterlingshire. The Grand Theatre and Opera House was opened in 1903, and was designed by architect Alexander Cullen with seating provided for 2,000. It operated as a music hall, and soon films were being screened as part of the programme. There was an entrance to the dress circle on Vicar Street (today renamed Princes Street) as well as an entrance to the gallery seating area on the same street. It was operating as a variety theatre in the 1920’s, and also had some use as a cinema. It was taken over by John Maxwell’s chain of Scottish Cinemas & Variety Theatres in 1929, which was soon to be part of the Associated British Cinemas(ABC) chain. The Grand Theatre was closed in 1932, and was partially demolished, leaving mainly only the four walls structurally intact.

These formed the frame of the new Regal Cinema which was constructed by ABC and opened on 29th October 1934. It was designed in an Art Deco style by their architect Charles J. McNair. Seating was provided for 1,996 seats in stalls and circle levels. The proscenium was 48 feet wide, the stage 16 feet deep, and there was a cafe for the convenience of its patrons. A Western Electric(WE) sound system was installed.

It was re-named ABC in 1961. In November 1972, the stalls area was closed to convert into two screens beneath the circle, with seating provided for 128 and 128. The former circle seating 704 remained open and became screen 1. The triple screen cinema re-opened on 11th February 1973. In 1986, ABC were taken over by the Cannon Group and it was re-named Cannon. Later it was taken over by MGM, then the Virgin Group before reverting back to and again renamed ABC. It was closed on 27th May 2001.

It has been converted into the City Nightclub and Sportsters Bar & Diner.