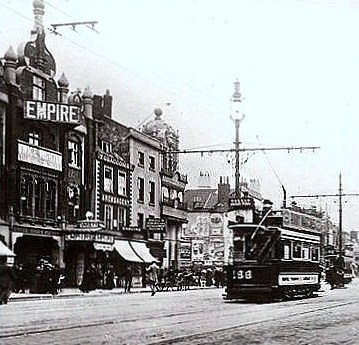 Located on Old Market Street at the corner of Captain Carey’s Lane. The Empire Palace of Varieties was opened on 6th November 1893 and was built for the Poole brothers. Designed by the noted theatre architectural firm of Wylson & Long, it had seating a seating capacity of 1,433, with 517 in the orchestra stalls, 62 in the pit stalls, 228 in the dress circle and 594 in the gallery, with four boxes on each side of the 38 feet wide proscenium. There was standing room for a further 1,000. The stage was 27 feet deep. There were nine dressing rooms and three chorus rooms which could accommodate 30 artistes. In August 1898, the Columbian Bioscope became part of the variety programme, and from then, moving pictures were regular attractions at the Empire Theatre of Varieties.

Bristol born Archie Leach worked back-stage at the Empire Theatre, he later went to Hollywood and changed his name to Cary Grant. In June 1923, the Empire Theatre screened “The Loves of Pharaoh”, which was followed by D.W. Griffiths “Intolerance”. Pantomime’s were popular productions each Christmas.

In March 1931, the Empire Theatre began afternoon ‘Talkie Cine-Matinees’ which proved to be a huge success. In April 1931, it became ‘Bristol’s New Super Cinema’ when it converted to full time cinema use, opening with “Madonna of the Streets”. In late-1932 it was taken over by the Associated British Cinemas(ABC) chain and they operated it as a cinema until November 1939, when it closed for redecoration, and reopened in December 1939 as a variety theatre under independent management. In 1940, it was taken over by the F.J. Butterworth Theatres chain.

In the early morning of 2nd February 1951, a fire broke out in the gallery seating area of the theatre, which caused considerable damage to that area. The theatre re-opened a few days later, only using the orchestra and dress circle levels. It closed in May 1951 while refurbishments were carried out, and on 6th August 1951 it was re-named New Empire Theatre, with seating for 950, using only the orchestra and dress circle levels. The New Empire Theatre was closed on 21st August 1954 with the “Carroll Levis Show” playing to a packed house.

The theatre had been sold to the BBC, to be used as a radio studio, which opened as the BBC Theatre on 11th January 1955. It was closed on 12th October 1962. The building was demolished in November 1963 to enable roadworks to be carried out on Old Market Street. The site today is taken by a pedestrian underpass, beside a roundabout.