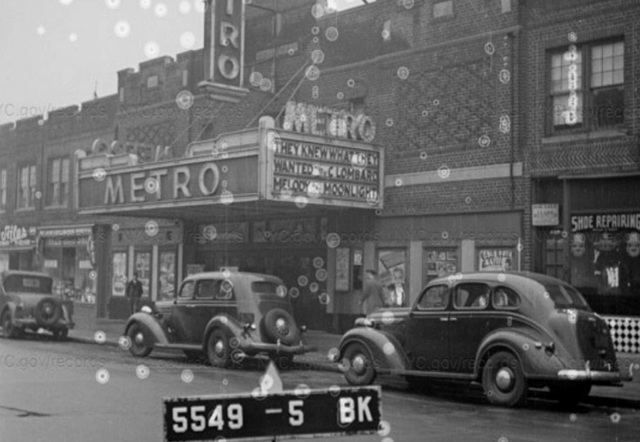 This neighborhood house stood on 20th Avenue near 64th Street in the Bensonhurst section of Brooklyn. The Parkway Theatre opened in early-1922 with a seating capacity for 701. It was equipped with a Wurlitzer organ.

Posted for PhilPhil by Theaterat. The Metro was a nondescript Nabe that probably seated less than 500 people. There were 3 blocks of seats divided by 2 aisles. The left and right seating ares ended on the walls, while the center block stood alone. There was no balcony, and the inside was painted in a dark red color. There was no seperate entrance from the lobby to the orchestra section. This was a strictly end of the line house that got last run -and older films. They generally got a good audience on the weekends. The neighboor residents used to call this theater( along with the Colony on 65th.st and 18 th. av0 the Dump.I think admission was a quarter. It was history by 1955. PhilPhil posted by Theaterat

Warren gives good photo —– but MY GOD, he is picayune !!!

Posted by Theaterat for Phil Phil…. The Metro was probably known as the Parkway, but I never heard it being refered to that. This was just a small nabe that got last run fare. There were also other theaters at that time that showeed last run fare, but many of them were larger and cleaner than the Metro, so they continued to "soldier on" somewhat longer. This theater generally got a decent crowd for weekend shows in those pre VCR, DVD, Pay Per View and Cable days, but the overall lack of cleanliness and the general run doen quakities of this theater kept many away. I rememb4er it closed very early in 1955. Like the lowly Colony theater at 65th.St and 18th. Av, practically across the street from the beautiful Walker, this theater was called "the Dumps" by local residents.I DO remember this theater having childrens matinees on Saturday, but I only went there a few times because our neighborhood theater was the Endicott at 13th. Av and 71th. St.Even though the Metro was run by the Endicott theater group, it was neglected in favor of the larger and nicer Endicott theater, wich was the “flagship” of the Endicott chain. I forgot about the supermarket`s roof cave in until I read the latest posting. Wonder if anybody has photos of it as a theater. Amazing how nobody ever thought of taking photos of these theaters way back when. Posted by Theaterat for PhilPhil

The supermarket that was housed in the space since the theatre closed has gone out of business. The building is now vacant.

How come everytime I click on a Photobucket pic—it just takes me to the home page….

A picure book called Bensonhusrt, Bath Beach, and New Utrecht communities on page 141 has a 1914 picture of a theatre on 20 ave & 64 st called Tobias & Jentzens photo Lyceum it appears to be fairly large I Don’t know if this the same Theatre.