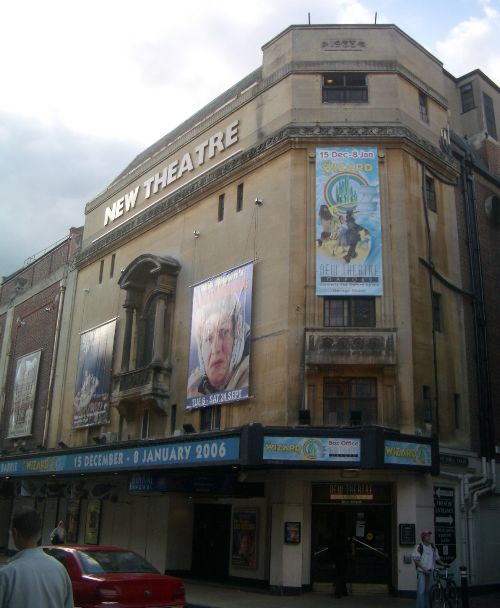 Located in the centre of Oxford, this is the third New Theatre to stand on this site. The first New Theatre was opened in 1836, and was known locally as the ‘Vic’. It was later re-named Theatre Royal. It was damaged by fire and demolished. The second New Theatre was built in 1886, designed by architect H.G.W. Drinkwater, and seated 900. It was altered and enlarged in 1908 to the plans of noted theatre architect W.G. Sprague. This 1,200-seat theatre was also used to screen animated pictures. It was demolished in February 1933.

The current (3rd) New Theatre was built for the Dorrill family and opened on 24th February 1934. It was designed by Sunderland based architects Thomas Ridley Milburn and William Milburn, with interior decoration by T.P. Bennett. The proscenium is 46 feet wide, the stage, which has a large revolve is 36 feet deep. There are 12 dressing rooms, and the orchestra pit could accommodate 24 musicians.

On 21st November 1934, the New Theatre presented an exclusive first-run in Oxford of Walt Disney’s “Snow White and the Seven Dwarfs”, using projectors which had been installed in the follow-spot box. After a few weeks, the New Theatre reverted back to being a successful live theatre.

In 1972, the New Theatre was sold to the Howard & Wyndham chain of theatres. They installed a new lighting control box at the rear of the dress circle and installed two Gaumont GK21 projectors. These were put to good use, when a Pearl & Dean advertisement reel was screened onto the safety curtain every performance. When there were no live shows booked, the New Theatre presented re-runs of recent feature films (projected onto a cinema screen), and this continued into the 1980’s.

The New Theatre was taken over by the Apollo Leisure Group in 1977 when it was re-named Apollo Theatre. In 2000 SFX Entertainment took over followed in 2001 by Clear Channel, who re-named it the New Theatre again in September 2003 after it had been refurbished. The projectors have now been removed from the building.

Since 2009, the New Theatre has been operated by the Ambassador Theatre Group.

The first movie that I saw at any cinema was Star Wars at New Theatre, Oxford. Been a movie fan ever since! :o)

Having a look at various photos on the web—this place certainly has a very impressive—if somewhat overbearing—proscenium!

I actually prefer the more muted colour scheme in Ian’s 1986 photo than the current look.

The first film I saw in a cinema was “The Jungle Book” (1967) during its run as a re-release in the mid-80s. Alas, this was in the local Coronet, which although it was once a lovely “streamline moderne” 1930s Odeon, had seen better days and was badly subdivided.

But then a few years later I then “discovered” Empire 1 and found shangri-la. :–)