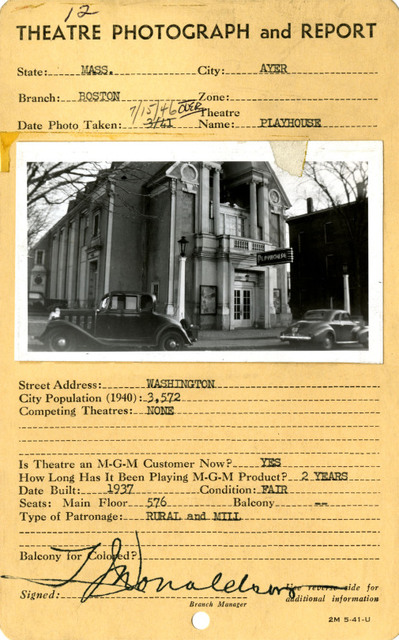 The Playhouse was an old movie theater in downtown Ayer, opened prior to 1941. It was still operating in 1950.

The Theatre Historical Society archive in IL has the MGM Theatre Report for the Ayer Playhouse. It’s on Washington Street, had 576 seats, opened in 1936 and was in Fair condition. There is an exterior photo dated July 1946. It was a large and distinctive building, perhaps a town hall, a library, a fraternal organization. Possibly this handsome building is still standing. The building looks older than the 1937 date, so perhaps that’s when the cinema began to operate within the building.

The Facebook page of the Markham Group, an insurance agency in Ayer, has a photo of the Playhouse taken in 1943. A comment on the photo says that the Playhouse was destroyed by a fire in 1962.

The 1927 Film Daily Yearbook lists 3 movie theaters in Ayer: The post theater at Camp Devens; the Strand Theater with 745 seats, open 7 days per week; and the YMCA auditorium (600 seats, open 6 days per week).

I looked at the photo of the Playhouse on the MGM Report, supposedly taken in 1946. The modern extension on the front of the building which shows in the 1943 photo from the Markham Group website is not there! So, I’m guessing that the MGM photo dates from 1941, not 1946. It was a very interesting and nice-looking building.