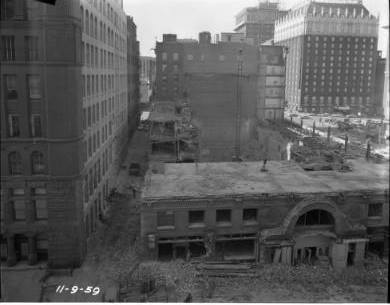 The Brandeis Theatre, once described as the most beautiful playhouse in America, opened at the corner of 17th Street and Douglas Street in Omaha, NE, on March 3, 1910. Over the years the elegant Art Nouveau style theatre showed both films and live productions. Last operated by the Cooper Foundation, they closed the Brandeis Theatre on April 30, 1959 with Lana Turner in “The Prodigal” & Ann Blyth in “The Student Prince”

It was demolished for a parking garage in August-October 1959.

The Brandeis opened March 3, 1910. Until 1933 it was a venue for live shows. In that year it was leased as a motion picture theater by the RKO corporation. It initially closed in the fall of 1958, but was then leased by the Cooper Foundation. The patronage of the reopened theater was disspointing, and the Cooper Foundation permanently closed it in April of 1959, handing the lease back to the Brandeis family. The last movie at the Brandeis was “The Student Prince,” which had at one time been a lavishly produced live show on the same stage.

On the ceiling of the Brandeis was a beautiful fresco by artist E.T. Behr, titled “The Triumphal Entry of Art”.

Demolition took place between Aug and October, 1959. Anything salvageable was sold. Some had commented at the time that the theater lost much of its beauty when the boxes and their accompanying Greco-Roman statuary were removed.

One corner of the exterior of the Brandeis Theater was left standing when the building was torn down, and houses (as it did then) the offices of an insurance company. It is identical to rest of the building, and can give a first-hand idea of what the theater exterior looked like.

A fixture at the Brandeis was stage-hand Clifford Donnell, who began working there at age 14, the day the theater opened in 1910. He was still there when it closed in 1959, and mourned its loss. He was quoted by the Omaha World Herald (on closing day) as saying, “I think I’ll go out and buy myself a jug.”

The February, 1912, issue of The Western Architect said that the Brandeis Theatre had been designed by the architectural firm of Barnett, Haynes & Barnett.

The Cooper Foundation closed the Brandeis Theatre on April 30, 1959 with a double feature of The Prodigal" and “The Student Prince” followed by the salvage sale