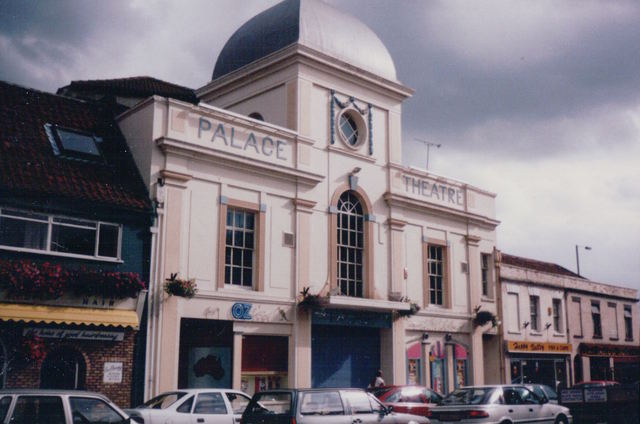 Located in Bridgwater, Somerset. The Empire Theatre was opened on 8th March 1916 with the play “A Pair of Silk Stockings”. It was designed by architectural firm Samson & Colthurst in a Moorish style. Seating was provided for 500 in the orchestra stalls and 200 in the balcony. The proscenium was 20 feet wide, the stage 20 feet deep, and there were four dressing rooms. There was a refreshment lounge at the rear of the balcony, above the entrance.

In 1917 it was taken over by the Albany Ward Circuit and re-named Palace Theatre, continuing as a live theatre, although films were screened occasionally. Taken over by the Provincial Cinematograph Theatres(PCT) chain in the 1920’s, it was taken over by Gaumont British in February 1929. It was equipped with a British Acoustic(BA) sound system in 1930, the first ‘talkie’ screened was Janet Gaynor in “Sunny Side Up” on 25th March 1930. The Palace Theatre was closed in 1938, when the licence was revoked due to a lack of emergency exits in the building.

When World War II began in September 1939, the theatre was used as a troops theatre by E.N.S.A. and it was known as the Barracks Theatre. After the end of the war, it re-opened spasmodically, screening films and presenting plays, but was closed more than it was open.

It was taken over by an independent operator on 24th April 1950 and was re-licenced to show films and present plays.

The Palace Theatre was closed in August 1986. The building remained empty and unused until 1996, when it was re-opened as the Palace Nightclub.