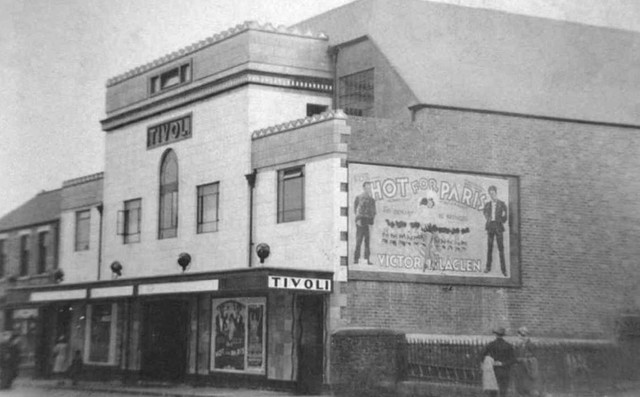 Located in Spennymoor, County Durham, five miles south of Durham city. The Tivoli Cinema was opened in 1911 by a Mr. Sleep. Soon after opening, on 25th May 1911, film jammed in the projector causing a minor fire which damaged the operating box. the damage was repaired and it soon continued.

The Tivoli Cinema was rebuilt to the plans of architect J.W. Hayes & Gray, re-opening on 19th October 1930 and operated by Thompson’s Enterprises Ltd. chain. The façade was covered in white tiles. The cinema had a café for the convenience of its patrons. In October 1935 it was taken over by Lewis Sheckman, and passed to the Newcastle upon Tyne based Essoldo chain.

It was re-named Essoldo from 10th January 1947. Part-time bingo was introduced in the early-1960’s and it was closed to films in 1969 and became a full time bingo club. This later closed and the building became a nightclub. It was destroyed by a fire on the night of 24th/25th August 1995.

The Essoldo was a 7 day cinema operation until its closure (together with the Essoldos in Shildon and Crook) in 1969. It reopened after a couple of months or so, having been refurbished for the purpose of Bingo.

Ladbrokes operated the bingo in the 1970s then after that it was operated by Tayman leisure who also had the Forum Hexham, Empire Crook and Classic Kells Lane Low Fell. The Tivoli name was reinstated. In 1993 The Tivoli became The Venue nightclub which was a rave club every Saturday night. The Venue club was extremely popular and made a name for its self at the time. Hundreds of people would travel in from outside the area as well as the regular locals. The Venue suffered an arson attack on Thursday October 24th1995. The fire completely gutted the building and was front page news at the time also appearing on local tv and radio.