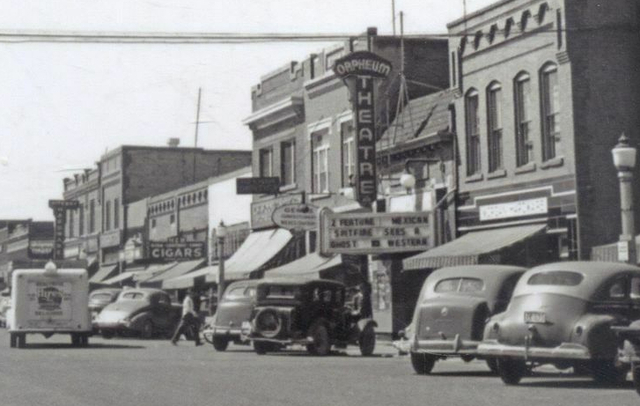 The Orpheum Theatre was opened on January 4, 1915. On April 18, 1919 I.H. Harris, president of Harris-Voeller Theatres took over and in the 1950’s and 1960’s had his office on the second floor of this theatre, overlooking Overland Avenue.

It was later renamed the Harris Theatre, but its marquee has been removed for years and the location became occupied by a retail store, today a martial arts school. The seats were rather advanced for the 1950’s. They were wide, metal-framed seats that would slide back and forth to allow easy access, but some times they jammed and didn’t work at all.

Mr. Harris also operated the Burley Theatre, the Alfresco Drive-In (now leveled) and the Wilson Theatre in Rupert. At one time the circuit had a total of 16 theatres in Idaho and neighboring states. The Burley Theatre and the newer Century Cinema 5 are still in the family today, operated by the third generation.

Google Maps has its pin icon in the wrong place again, about a mile north of the theater’s actual location. It’s probably because the address should read simply Overland Avenue, not N. Overland Avenue.

January 4, 1915 grand opening ad of the Orpheum in photos.