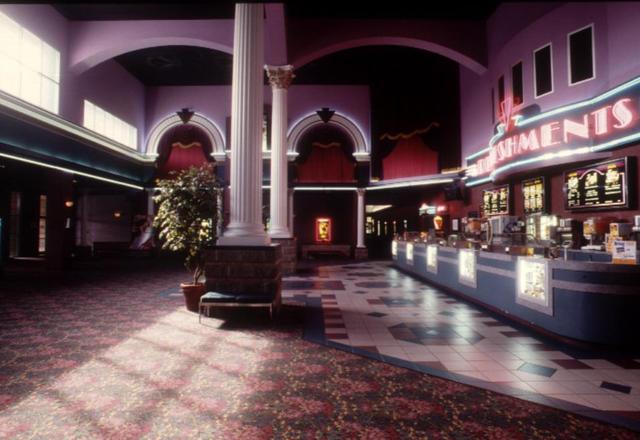 Malco Theatres' first and only foray into the megaplex scene began with the Majestic Cinema, which opened on November 14, 1997 with 11 screens and expanded to 20 in 1998. A technological showcase, the Majestic Cinema featured THX-certified auditoriums, Dolby Digital and DTS audio, large format screens and an auditorium with a custom-designed audio system crafted with Klipsch speakers.

The Majestic Cinema signalled the return of stand-alone multiplexes with elaborate front displays and lobbies, a trend which Malco has continued. Information from Malco Theatres via Wikipedia. Used with permission.

The nine additional screens have now been closed and are used for storage. The original 11 screens remain open in 2017. It was closed in March 2020 due to the Covid-19 pandemic and never reopened. In July 2021 it was announced that it would be sold and converted into a multi-purpose venue, while retaining some cinema facilities.

Jimmy Tashie at Malco commissioned this display and wanted it to resemble a hood ornament. It does.

An article in the June 24, 1997, issue of the Memphis Daily News said that Malco’s new 11-screen multiplex, The Majestic, would open in August. The project was designed by the Memphis architectural firm Mark E. Watson & Associates.

Having been a Head Projectionist for Malco Theaters for nearly 20 years I can testify to the fact that until The Paradiso, The Winchester Court was the only theater Malco had in Memphis that had “large format” projection, or what is called in the profession 70mm. I operated the Winchester Court for it’s first 4 years, and later operated the Majestic for 5 years. It did have 2 exceptionally large screens, but up in the booth we were throwing regular 35mm film on them. Chief Technician for Malco theaters Mike Thomson once told me that we were pushing the absolute limit for blowing up 35mm, and it did look it. We could never get enough light out of the lamp houses, and unless the print was by Kodak the image was grainy.

@rivest266: A few years ago Malco shut the addition side down (9 screens), due to “problems” with crowds and low turn out. Now that half of the building is used for storage, and only the original 11 screens are run.

Recently Malco announced the conversion of the Majestic to a multi-purpose venue. There will still be some screens operating but it will not be solely a cinema.

This opened on November 14th, 1997, as the first all-stadium seating cinema in Tennessee, Arkansas, and Mississippi.