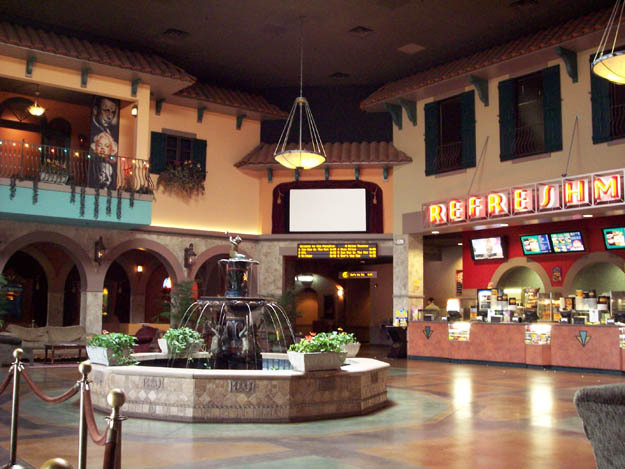 The Paradiso Theatre is the first of Malco’s contemporary Memphis cinemas to have an ornate building. It is the premier first-run cinema in the area with large screen auditoriums and many special event showings such as live performances of the Metropolitan Opera during the season. All of Malco’s cinemas have converted to digital projection.

The Paradiso’s huge lobby is beautifully decorated and patrons are surrounded with coming attraction displays both standing and on screen. The concession serves from a large menu. It has 14 screens and is situated in a busy commercial area bordered by Poplar Avenue and Mendenhall.

The center fountain, skylight and surrounding balconies give the impression of a Spanish courtyard, once again remembering the grand foyers of past years. The cinema contains an arcade, coffee bar, party room and a second concession for the auditoriums far from the lobby. It is the primary 3-D cinema in the area.

An article in the December 9, 2001, issue of Memphis Business Journal said that demolition would begin the next week to remove a building on the site of the proposed Malco multiplex cinema at Poplar Avenue and Mendenhall Road. The 14-screen house was tentatively to be called either the Rialto or the Paradiso.

The project was designed by the Memphis architectural firm Atkins Buchner Price Architects. Principal architect on the project, Robert S. Price, had previously been design and production manager at Mark E. Watson & Associates, the firm which had designed Malco’s Majestic Cinema and Wolfchase Cinema, both opened in 1997.

I was the Head Projectionist at this theater when it opened, and was involved in the assembly and wiring of the projection booth beginning 7 months before it opened. I remember as the screens were being hung, Jimmie Tashie was becoming increasingly unhappy with their size. They weren’t big enough. So he had the screen frames rebuilt and screens rehung so as to go from wall to wall as they all do now. Only problem was that up in the booth we had begun cutting aperture plates to the new lenses that we had just bought. 35mm projectors use 2 different lenses for 2 different film formats. A “flat” lens that simply blows up the image as is, and an anamorphic lens for wide screen. The anamorphic lens is very expensive, and Malco only buys the best of the best for their projection booths. These 14 anamorphic lenses had a price tag of over $12,000 each.

I loved working for Jimmie and the Lightman’s. Good people who care about theater, spare no expense. Another interesting thing that happened just weeks prior to opening (2 WEEKS!!). Jimmy was not happy with the color of the carpet AND the color of the paint. SO,… I watched the entire lobby and halls get redone, with crews working through the night. Opening night, really had that new theater smell as the last coat went on that morning.

A STELLAR OPENING: Just a few days after opening night Memphis was hit by straight line winds that took out power through the entire city and surroundings. Thinking quickly Jimmie rented a portable semi-truck sized power generator, and 2 sets of high intensity search lights. We spent that whole afternoon testing powering up the building (Air-conditioning/ projectors/ ect,..), like that scene in “Apollo 13” where the NASA techs are trying to figure out how to power up without blowing a fuse. AND IT REALLY PAID OFF. Here it was, middle of the summer heat, no power anywhere, and at night all of Memphis is pitch dark. Absolute DARK. All of it except for these search lights screaming through the sky from the center of the city, announcing like a beacon to all the millions of Memphians that air-conditioning and entertainment is here, for you to enjoy. For one solid week power was out and we sold out every show, all day long. I firmly believe that The Paradiso has become such a Memphis “thing” because of that night and the on his feet thinking that is Jimmie Tashie’s amazing gift.