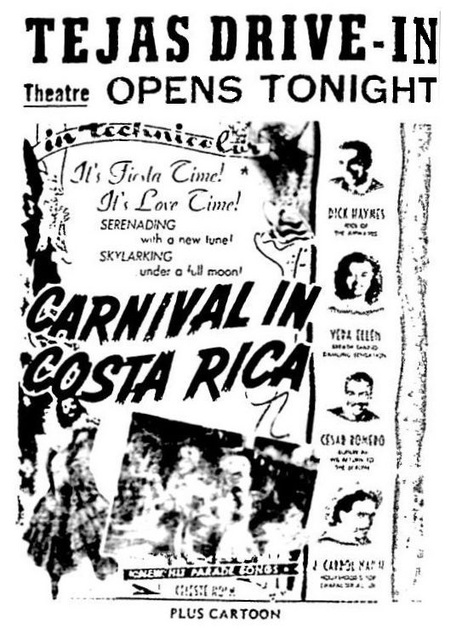 The Tejas Drive-In opened on June 2, 1948, featuring the 1947 musical “Carnival in Costa Rica” with Dick Haymes, Vera-Ellen, Cesar Romero and Celeste Holm. It was the first drive-in theatre to be opened by Rubin Frels of the Frels Theatre Circuit. It featured a 50 feet high screen tower with the screen being 42 feet wide X 30 feet high. It opened with one central speaker system eventually updating to in-a-car speakers. Parking was on nine gravel ramps which held 400 cars. The admission charge was 9 cents for children and 35 cents for adults.

The opening for the Aztec Drive-In was October 16, 1951, featuring the 1950 musical “My Blue Heaven” with Betty Grable, Dan Dailey and David Wayne. This also had a capacity for 400 cars. The Aztec Drive-In was built adjoining to the Tejas Drive-In and was a twin to the Tejas. The only difference between the two drive-ins was the concession stand and the projector booth. However, the Aztec had its own entrance and exit for the convenience of their patrons. They screened different features at staggered times so they would not interfere each other. Frels commented the growing popularity of the Tejas has necessitated the additional theatre. The Aztec would handle the overflow crowds on special attraction nights. The drive-in was now known and advertised has the Tejas-Aztec Drive-In Theatre. The Tejas-Aztec screened Spanish movies at times. In November of 1955, a new service was provided by the drive-in theatre. An automated phone answering service to inform their patrons of upcoming features and their respective viewing times was added.

The Tejas-Aztec Drive-In Theatre temporally closed according to a movie advertisement on June 25, 1959, never to reopen again. The drive-in was destroyed by hurricane Carla in September of 1961 and Rubin S. Frels sold the property in 1966. The property was cleared and is used for retail now. Why did it close in the middle of the summer season? My thinking is that since the Lone Tree Drive-In opened up in March of 1957 there was not enough business to support all the drive-in theatres in the area. The Lone Tree was designed to be built as twin screen but was built has a single instead. This allowed for an additional screen could be installed to make it a twin should business dictate the addition. Since the Tejas-Aztec Drive-In was the oldest and smaller than the Lone Tree Drive-In and with urban sprawl, it made the property more valuable and it was closed.

Just uploaded some movie ads. Does anybody have pictures or aerial view of it? It would be interesting to see the layout of both of the drive-ins.