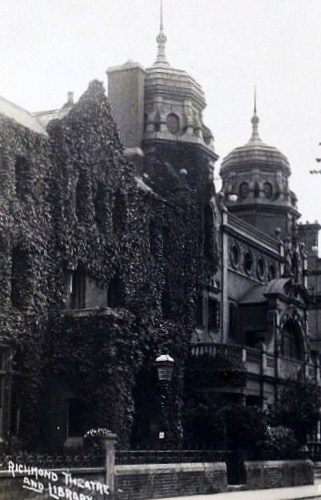 Located in Richmond upon Thames, Surrey, in the west of today’s Greater London. The Theatre Royal and Opera House was opened on 14th September 1899 with a production of Shakespeare’s “As You Like It”. It was designed by noted theatre architect Frank Matcham who provided a seating capacity of 1,370 in orchestra stalls, dress circle, gallery, pit and six boxes. The proscenium is 27 feet wide, the stage is 34 feet deep and there were originally eight dressing rooms (today there are twelve). The Baroque style facade has a terracotta statue of Euterpe (Goddess of Music) over the entrance (identical to one mounted on the front of the Frank Matcham’s Hackney Empire Theatre, east London in 1901).

It was soon re-named Prince of Wales Theatre, and by March 1909, it had become the Richmond Hippodrome Theatre and films were being presented as part of the variety programme. It was granted a Cinematograph Licence in 1910, which it retained until 1914. Since then as the Richmond Theatre it has been a popular live theatre. It was renovated in 1990.

The Richmond Theatre is a Grade II* listed building, and is a fine example of architect Frank Matcham’s work.