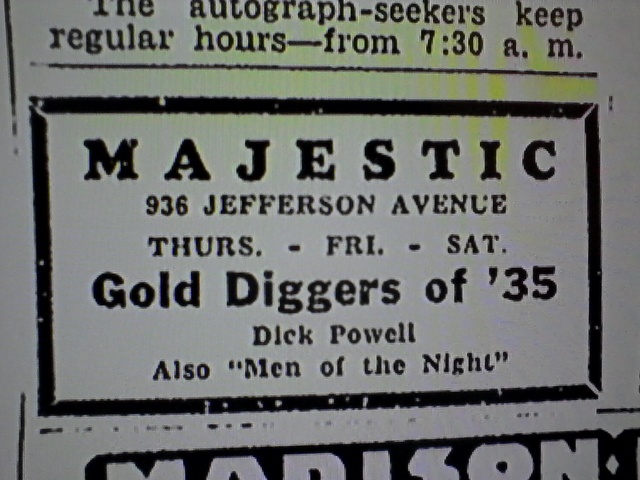 Morris Zimmerman and Julius Weiner opened the Majestic Theatre in 1926. It was still operating in 1941, but was listed as (Closed) in the 1943 edition of Film Daily Yearbook.

Other than the announcement of its opening in an issue of Motion Picture News, I’ve been unable to find anything about the Majestic Theatre on the Internet. However, the residential buildings north of McCree Way look like they were built before 1926 themselves, so I’m wondering if the addresses in Rochester might have been shifted at some point after 1926.

The address is correct, 926 Jefferson, according to the 1935 plat map of Rochester: http://photo.libraryweb.org/rochimag/rpm/rpm00533.htm

The orientation to the street was odd: the theater was actually at a 45 degree angle to Jefferson, and was oriented to be square with the lots on Plymouth Avenue.

It also appears on the 1926 plat map: http://photo.libraryweb.org/rochimag/rpm/rpm00113.htm (Also appearing: The Plymouth Theater, at Plymouth and Magnolia).

The March 13, 1926 issue of The Moving Picture World said that the Majestic Theatre would open in Rochester on March 17.