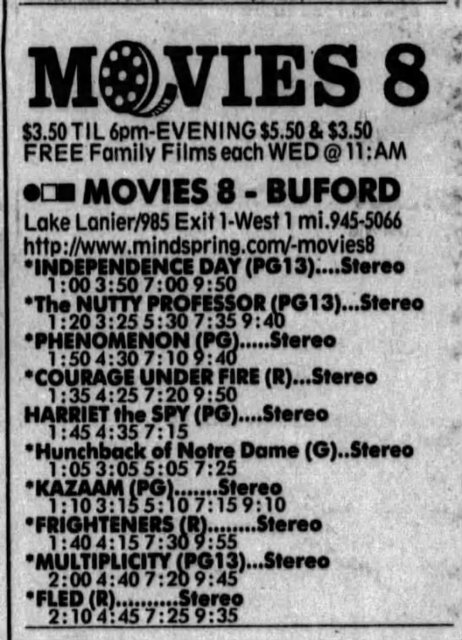 The Movies 8 opened on December 23, 1994. It was closed in 2000. Most likely after Regal opened the Georgia 20 some short distance down the road. The building now houses a CVS Pharmacy.

I don’t have pictures or a lot of info, but it was located where the Aaron’s currently stands. The theatre was designed for you to go up a hill and enter the auditoriums going downstairs, rather than just going up the stairs. The concessions was on the left side coming into the theatre. There was six cinemas up on the left side, and two on the bottom. I remember seeing a few movies there like The Parent Trap, Tarzan, Stuart Little, and My dog skip. I also remember they did have dollar summer kid movies in the summer mornings. They did close in summer 2000, because the mall opened. On a side note, there was another theatre right beside the Chinese restaurant in that outlet mall, just before this theatre opened. I don’t have a lot info on that theatre, but according to my dad there was another cinema in that shopping center, that closed, because of this cinema too. That’s all I have on this theatre.

I really miss the Movies 8. During my high school years (1996-2000) I saw SO many movies here at the best prices (around the $3.50 and $3.75 range) and kept most of my ticket stubs. It was a real sad day when this theater closed after the Mall of GA opened. Movie tickets are now more expensive and the movies themselves are worse.