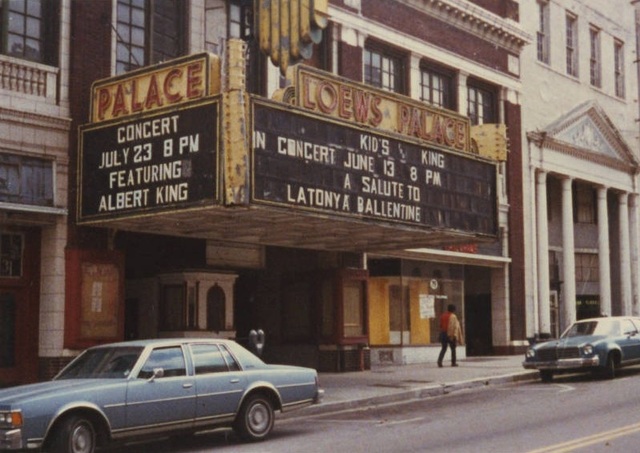 Loew’s Palace Theatre opened on January 15, 1921. A row of 19th century storefronts was removed in 1919 to build the Palace building, but the half-block depth caused the Palace Theatre to have a shallow, wide lobby, with twin staircases. Brass light fixtures stood on the newel posts. A dividing wall of draped windows between the lounge areas and the front lobby served to make the space appear larger and more imposing. The architect was Thomas Lamb; the décor, in Loew’s Adam style was elaborate in all areas, with stained glass in many light fixtures and all exit signs throughout. Early newspaper articles mention a half dome in the stage area copying the Rialto Theatre in New York City. This was later removed and a mural topped the flat proscenium. It also opened as a strictly film theatre, adding stage fare later. Like the Loew’s State Theatre two blocks away and opened in 1920, it had a Moller theatre organ which was replaced with a Wurlitzer 3 manual, 11 ranks theatre organ in December 1926.

M.A. Lightman leased the Palace Theatre from December 25, 1935 and it was renamed Malco Theatre which adorned the marquee until May 31, 1940 when it reverted by to the Loew’s Palace Theatre name.

Its classic 1940’s outdoor display, after Loew’s reopened the theatre, is visible in many downtown photographs and many noteworthy films played there. CinemaScope was advertised in 1953.

The Palace Theatre was most noted for being the Mid-South’s Cinerama theatre from July 26, 1961 with the Mis-South premiere of “This Is Cinerama”. It was at this time tat the Wurlitzer organ was removed from the building. The installation of Cinerama required a number of interior alterations to accommodate the huge curved screen and triple projection equipment. That screen could not be used for standard format movies and, when it was removed in October 1963, the auditorium looked patched over and shabby.

Loew’s donated the Palace Theatre to Bountiful Blessings Deliverance Church in 1977. The church reopened the stage and used it for a variety of purposes, but the building continued to deteriorate and it proved difficult to maintain. It closed for good in 1985. It was replaced by a parking garage, still standing in 2013.

Here’s a remembrance and photo of Loew’s Palace in Memphis: http://www.memphistechhigh.com/memphis/memories/palace.html

Photos, even old ones, of the Palace are scarce. Came across this one recently. Lobby, as opposed to the State’s long one was crosswise with two flanking staircases. Wall was originally glass but was painted over because the standee rail was just inside.

Will, where did you come by the Don Baker memorabilia?

Where else? Stan Hightower.

New Interior photos of Loew’s Palace have now been posted.