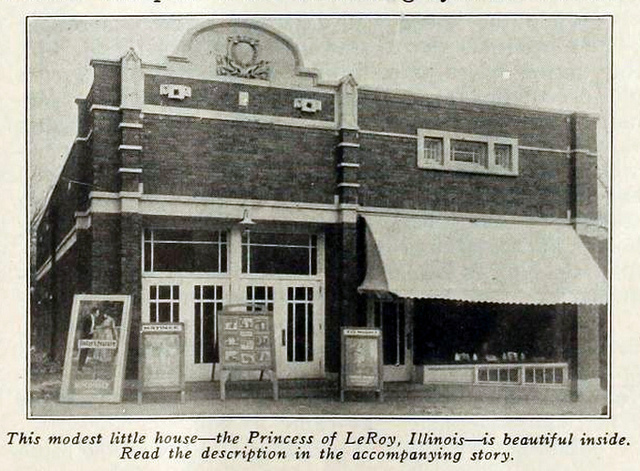 Marcus West, son of Simeon West, built the Princess Theatre in 1916. Architect Arthur L. Pillsbury designed the brick theatre with limestone accents. The first movie was “Tennessee’s Partner” on November 21, 1916. The original theatre was a silent movie house with piano accompaniment, as “talkies” did not make their debut in Le Roy until 1931. A grandson of Marcus West recounts that West’s daughter, while in high school, substituted as piano player when the regular player was unable to accompany the film.

Records list the manager in 1928 as Harry W. Vanatta, and in 1932 as R.A. Isaacs. John Frieburg later operated the theatre for several decades. One of Frieburg’s granddaughters stated that Frieburg “took such care and pride in the theatre and keeping it in tiptop shape. He used lots of duct tape, and much love in keeping the place up”. (See additional Frieburg history below.)

Karen Edwards operated the theatre during the 1970’s. John Graham purchased the Princess Theatre during 1977; Graham e-mailed “I noticed on the Princess Theatre website that you are displaying the old MotioGraph projector in the lobby. I rebuilt that thing one time (the intermittent movement). Quite a thing”. After three years, in 1980, Graham sold the Princess Theatre to Maurice Schiff of Urbana. In 1984, Scott Graham, no relation to John Graham, bought the theatre from Mr. Schiff. With his experience from owning two other theatres, Mr. Graham had big plans to renovate the Princess Theatre by using a Medieval/Tudor type look, even including a wrought iron chandelier in the main lobby. His renovations began and even got him electrocuted, but unforeseen circumstances led to Mr. Graham having to sell the theatre. It became a county music venue in the late-1980s and then a teen dance hall.

In October of 2003, the Princess Theatre was purchased by David A. Kraft and Kris and Susan Spaulding. After 10 months of renovation and remodel, the theatre re-opened on August 6, 2004 with Disney’s “Around the World in 80 Days”. The Princess Theatre was awarded a Heritage Award from the Preservation And Conservation Association for the renovation. With both families living outside of Le Roy, the commute proved to be too much and the theatre closed in November 2006 only to be reopened less than a month later.

Michael E. Hanafin purchased the theatre from Kraft and Spaulding in December 2006. He and his family regularly attended movies there and did not want to see the theatre close down again because it was such a huge asset to the community . Hanafin finished renovating the exterior of the building and finished some minor remodeling on the interior of the building. Ben Slotky, former owner of the Castle Theatre in Bloomington, IL, was hired to manage the theatre for Hanafin until Septemer of 2007 when the Hanafin family decided to run the theatre on their own.

Mike’s whole family takes part in the operation of the facility with his wife Gail running the ticket booth and tending to the birthday parties and free movies. His three daughters, Christie Mash, Dawn Hanafin and Heather Wilkins all serve as the projectionists, film bookers, concession managers and event planners, all dealing with the general operations of the theatre. Hanafin has four grandchildren, Abbi, Mikey, Morgan and Hunter, who all have their specific duties to perform at the end of each showing. They plan to have the theatre in the family for a very long time.

The following history of the Princess Theatre has been written by Pat Frieburg Fuller as she remembers it:

In 1937 Mr. & Mrs. John L. Frieburg, Sr. purchased the Princess Theatre from a Mr. Woods and began remodeling. They put in 329 new seats, wall coverings and new projection equipment with the very latest sound system. The lobby was repainted, new flooring and large frames for the advertising posters were added. The outside marquee with The Princess Theatre was hung.

The operation of the Princess Theatre was a family business. Mrs. Frieburg sold the tickets at the ticket window. The price of tickets was 25 cents for adults and 10 cents for children under 12 years of age. Mr. Frieburg, Sr. collected the tickets until time to start the projectors. He ran the projectors during the show, the movies were known as shows. John L. Frieburg, Jr., known as “Bud” then stepped in taking tickets until time to usher. “Bud” and daughter, Patricia A. Frieburg, “Pat” ushered patrons arriving after the show started to vacant seats. Youngest daughter, Eileen I. Frieburg, stayed with her nanny at the family home on Center Street during the shows.

The theatre was open six nights a week and closed on Tuesday. Three different shows played each week. Short subjects, newsreels and cartoons were shown before the feature. Shows ran Sunday and Monday, Wednesday and Thursday, and Friday and Saturday. The show was run twice each night with the first beginning at 7pm and the second at 9pm. As business continued to grow two Sunday afternoon matinees were added at 3pm and 5pm. Ushering was brisk at times with people waiting for a vacant seat. Patrons arriving late would stay into the beginning of the next showing to catch what they had missed. Seating was placed later in the lobby for people awaiting a seat in the auditorium.

The next addition was a candy case in the lobby. Not long after a popcorn machine appeared. No drinks were allowed in the auditorium while the Frieburgs owned the theatre. The water fountain at the front door of the lobby, which was usually busy, provided liquid refreshment. Candy sales were later ended and popcorn was the only available snack. Mr. Frieburg made the popcorn in the lobby before opening the theatre. A box and bag were the two sizes sold. Frequently people stopped in just for popcorn and a visit with the Frieburgs.

Change always enhanced business. The next big excitement was the cash JACKPOT, which was drawn between the Thursday shows. To win the JACKPOT patrons had to attend the Wednesday or Thursday night show. If the person’s name which was drawn was not there to claim the money and had not been to the show on Wednesday $10.00 was added to the JACKPOT for the next week. If the JACKPOT was claimed the next week started over at $20.00. TV arrived in the community and big changes were coming in the movie industry.

The original blueprints of the Princess Theatre are in the Arthur L. Pillsbury Collection at the McLean County Museum of History. Pillsbury was on of the leading architects in Bloomington, Illinois, over the three decades prior to his untimely death in an automobile accident in 1925. His involvement in the Princess Theatre project was noted in the April 15, 1916, issue of The American Contractor:

How the building came to be attributed to W. W. Van Atta I don’t know. No architect of that name appears in any of the construction or design journals of the period, and every instance of his name on the Internet is connected with this theater. The Pillsbury collection inventory list gives the names of Pillsbury’s associates and successors, and no Van Atta is among them.

The source of the attribution appears to be the history page of the theater’s web site, but that history provides no original source or documentation for the claim. It does say that the manager of the theater in 1928 was a Harry W. Vanatta, so it sounds as though there could have been some conflation going on somewhere along the line.

In any case, until somebody can come up with sound documentation that a W. W. Van Atta did design this house, the presence of the actual 1916 blueprints in the Arthur L. Pillsbury collection provide a pretty good argument that we should attribute the design of the Princess Theatre to Pillsbury.

Mike Hanafin, owner of the True Value Hardware and NAPA Auto Parts stores in LeRoy, wants to purchase the property and the city agreed to pony up $50,000 toward the project.

One Week Super Sale – OPEN NOW! From now through October 16, choose from AMAZING subscription offers.… “If all goes well, I could be showing movies by Thanksgiving.”

The LeRoy City Council recently agreed to reimburse Hanafin $50,000 in tax increment financing funds to acquire the property. Tax money generated within a TIF district stays within that area to make further improvements.

The TIF funding is contingent on an initial investment of $280,000 from Hanafin, who plans to rehab the building and parking lot, even though the property went through a major overhaul two years ago.

“With an old theater, I don’t think you’re ever done,” Hanafin said.

It’s the second time in as many years the city has coughed up cash to reopen the Princess.

To aid the revitalization of LeRoy’s once sluggish downtown, the city loaned the current owners $65,000 in 2004 to help cover a $200,000 theater renovation project.

City Administrator Jeff Clawson previously said he expects the city to receive payment when the building is sold. He was unavailable Tuesday.

Latest gallery in this section

Google’s new lineup of phones and gadgets: A quick glance Co-owner David Kraft put the property for sale in October. He said he didn’t know about Hanafin’s requests.

The Princess Theater had deteriorated before Kraft and Kris and Susan Spaulding gutted it two years ago. The building had sat vacant for nearly 20 years.

Records indicate the last movie was shown in 1982. A country-music center occupied the building for a couple years in the late 1980s, and the building briefly housed a teen dance hall in 1990.

During the vacant years, however, a leaky roof left the ceiling, paneling, plaster and everything else inside water damaged.

Then Kraft and the Spauldings updated everything. They built a new roof, put up new roof rafters and added steel beams to support the walls. The group installed a new sound system, a larger movie screen and church pews and bistro seating in the lobby for those who wanted to congregate after movies.