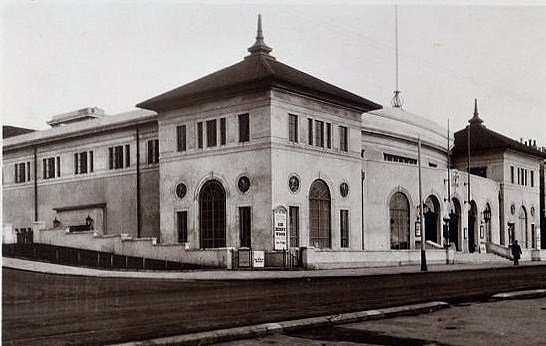 Located in Hastings, East Sussex, on the sea-front. The White Rock Pavilion was built as a concert hall for the Hastings Municipal Orchestra, and was opened by the Prince of Wales on 6th April 1927. Seating was provided in stalls and circle levels. International concert artistes also appeared here, and in the late-1920’s a proscenium was built and it began to stage shows. It also held a Cinematograph Licence from 1927 until 1986, and films were presented occasionally from 1933 to 1977.

In 1985, it was refurbished and re-named White Rock Theatre. It is owned and operated by Hastings Town Council, and is a Grade II Listed building.

A scanned slide of the theatre taken around 1979 – some work seems to be being done to the façade.