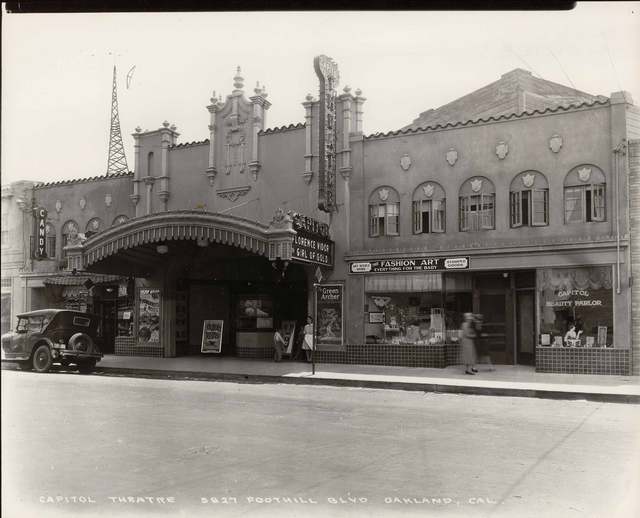 This neighborhood theater operated for almost thirty years, opening in 1924

After it closed in 1952, it converted to a bowling alley in the 1960’s, serving in that capacity for many years.

It was closed again and suddenly demolished about 2001.

Although its facade was completely modernized in the 60s when converted to bowling use, the side and back walls of the auditorium exterior were another story. Up until the end, one could see (and in my case photograph) original painted signs on the concrete reading, “Capitol Theatre… Photoplays.”

The Capitol Theatre was located at 5827 Foothill Blvd., it seated 952 people.

Curiously, in many old newspaper theater listings (seldom known for their exactness to begin with), the Capitol’s location was stated as “Bancroft and Seminary” (Seminary Avenue being the nearest cross street to the Capitol; Bancroft Avenue being one block parallel to Foothill here). Possibly this was because one could easily see a prominent corner of the Capitol (“The Best in Photoplay Pictures” [which, as Gary Parks pointed out, could still be seen to its final days of existence even decades after it closed]) from that intersection. The above-listed address (as stated by William) is correct, however.

In another theater robbery in Oakland, between $50 and $100 was taken at the Capitol Theater, 5827 Foothill Boulevard. Miss Marjorie Maginot, 19, a University of California student working as a cashier at the theater, said two men approached her and told her it was a â€œstickup.“ â€œI don’t believe it,” she said she replied. “Give us that box,” one man ordered, and she did after he feigned having a gun in his pocket.

The Capitol’s architects were the Reid Brothers; it was originally built for Gabriel and Lenore Moulin, who owned a major photographic studio in San Francisco.

I have been to the Capitol Theater many times, during the late 40’s and early 50’s. Primarily in the 50’s while attending Frick Jr. High. I lived on 63rd Ave. at that time and would go to the Saturday Matinee’s. Later, in the early 60’s I bowled in a league at the converted Hi Score Lanes. I have a few trophy’s from bowling there. I also remember the Hobby Shop across Seminary, Russcraft Hobbies.