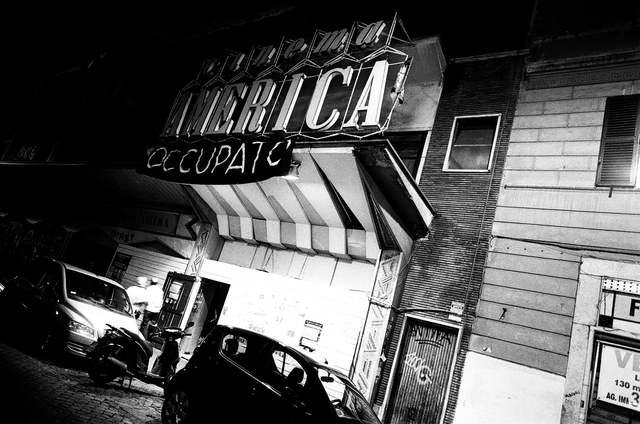 Cinema America was designed by architect Angelo Di Castro in the 1950’s. It was closed down circa 2000.

The complex is located in the now increasingly trendy Trastevere area of Rome. A real estate developer wants to turn the cinema into a number of apartments. But at the end of 2012, the cinema was occupied by a Roman chapter of the Occupy movement. As of July 2013, they use it as a base of operations and films are occasionally shown (by means of video projection) which could attract an audience of 1,000. The occupiers want to convince the municipal authorities of the architectural and cultural importance of this cinema.

They were evicted from the building in early-September 2014, and have now taken over (with the owners approval) a disused bakery next door and continue to screen films in what is now called the Mini Cinema America. The fight goes on to save the Cinema America and persuade the owners to re-open it.

A (1970s?) picture of Cinema America can be found in the Cinecittà / Luce archive online: http://url.ie/i7cz