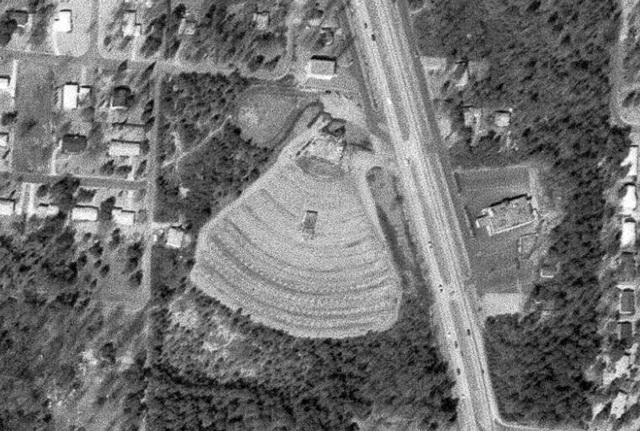 Located in Vestavia Hills to the south of Birmingham, AL. The Shades Mountain Drive-In was opened on July 1, 1948 with June Haver in “Three little Girls in Blue”. It was operated by Waters Theater Co. Car capacity was listed at 310. In 1955 it was taken over by the R.M. Kennedy circuit. Cobb Theatres took over operations in 1967 and the drive-in closed in September 1968.

Like millions of other children of that era I have memories of attending the drive in dressed in my pajamas with pillows, blankets, etc… filling the back seat of the family sedan, in our case a Chevy of course. This was the closest location of any of the Birmingham theaters to our house. Because of the small number of first run theaters in town it was not unusual for lower profile first run product to play here, although two of my more distinct memories concern seeing 10 Commandments and The Longest Day, both sub runs, at Shades Mt.

Shortly after we moved, this location was demolished and the Red Lobster that now sits in the parking lot of the shopping center marks the rough location of the screen and box office. Cobb moved down to the foot of the hill near where 31 crosses I-65 and built a single screen drive in there called the Thunderbird. This location closed in September 1968 with the Thunderbird opening at the same time.

Among the last two programs to play here were “The Detective” with “Fathom” and “Wild In The Streets” with “Glory Stompers.” By this time Shades Mt. and then Thunderbird played fairly standard second run programs along with the Skyview and recently opened Mustang. The sex and horror programs usually associated with drive ins mostly played at the Airport, Bama, and especially the Robinwood locations.