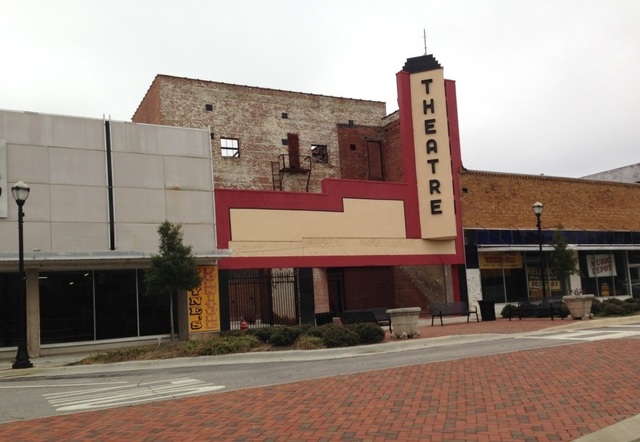 The Martin Theatre opened on September 2, 1941. Seating was listed at 380. The theatre was operated by Martin Theatres. In the summer of 1981 the theatre was hit by lightning and destroyed by the subsequent fire, leaving only the four walls standing. By 2016 movies and concerts are held within the shell of the building.

Martin Theatre opened in 1941. Martin theatre was hit by lightning and caught fire in the summer of 1981, and the interior burnt down. The front and side(and back?) walls, and theatre sign(marquee?) are still there. The remains of the theatre were seen brielly on an episode of American Pickers(episode – Sweet Homes Alabama). The theatre has been reopened as an outdoor theatre showing movies and concerts and live productions with canvas sheets over the top where the roof and ceiling used to be.

The amphitheater inside the walls of the Martin Theatre held its first event on June 7, 2014, according this article from The Randolph Leader of June 11 that year. The article has a bit about the project and about the theater’s history, and one small photo of the opening event.

In 1941 the Martin Theatre had a soft opening on August 22, with a formal grand opening on September 2, to coincide with the dedication of Roanoke’s new City Hall.