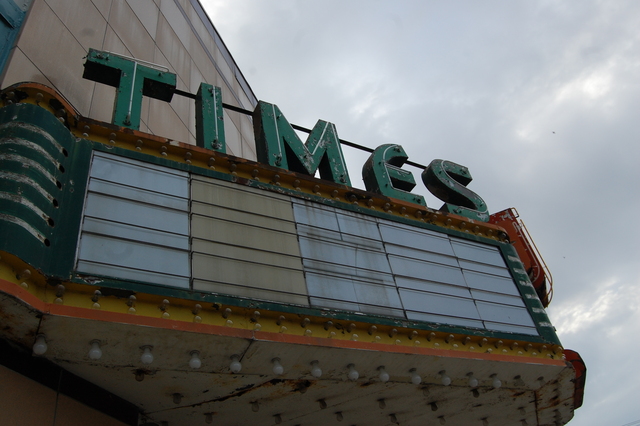 The Art Moderne style Times Theatre opened in 1941, and still features a terrific neon-lit triangular-shaped canopy marquee and a beige-colored tile facade. It was operated by Fox Theatres Corporation.

Later operated as a twin, screening first-run features, it was part of the Kerasotes chain. In 2008 it was operated by an independent operator. It was closed in January 2011.

Yes, the Times still sports its neon canopy and the old ticket booth still sits in the entry way, though I don’t believe it’s been used in years. I have heard stories of a beautiful red dragon mural that has been hidden behind paneling in the lobby. I’ll get some pics on-line ASAP.

The Times Theater is now FOR SALE. Contact Colleen Settles at Grojean Real Estate 217-491-3388 or email
Lots of possibilities!

This theater is closed.

The May 15, 1953, issue of the Jacksonville Daily Journal reported that Fox Midwest has sold the Times and several other theaters in the region to a local company called El Fran Theatres. Houses in Centralia, Mt. Vernon, Benton, West Frankfort and Marion were part of the deal.

By 1964, the Times was being operated by the Frisina Amusement Company, who still controlled the house at least as late as 1976.

Krush Nutrition is now in the lobby of the theater. The marquee has been changed to “Time” instead of “Times”. Not sure why the “s” was removed.

The Times Theater was an unlikely survivor in a 70-year ride under four chains and an independent owner at the end. Midwest Fox Theatre Circuit built the Times Theatre in 1940 launching Christmas Day of that year. It was the only Jacksonville theater to be part of the Paramount decree which aimed to break up the vertical monopoly of the movie theaters. Fox was forced to divest of one Jacksonville theater and the Times was the one excised from its portfolio. In a five theater deal, four Southern Illinois theaters and the Times went to El Fran Theatres Circuit Inc.

On May 31, 1953 the El Fran operation of the Times went live and on July 29, 1953, the theater was repositioned as a first-run operation. Less than two months later and just four months into its operation with the Times Theatre, fire ravaged the building on September 22, 1953 and El Fran had bookings and no house in Jacksonville to show them. El Fran approached Fox Midwest and created a deal to sell its – then – lightly used Majestic to El Fran while the Times was brought back to life. The Majestic would close in 1954 with the Times relaunching Christmas Day 1953 – its 13th birthday – after preview soft launches on December 22 and 23. The theater seating was increased to 700 patrons.

Howard Busey, an investor in the El Fran Circuit, held on to the 67 Drive-In and would purchase the Times in 1963 operating both theaters for his Frisina Theatres company. Kerasotes took on the Fusina holdings next twinning the Times' house in its ownership from 1978-2008. The theater then went independent as it tried to remain relevant in a DCP universe. It ceased as a film theater in 2011. It hosts other retail in its lobby and is the site of a haunted house Halloween event.