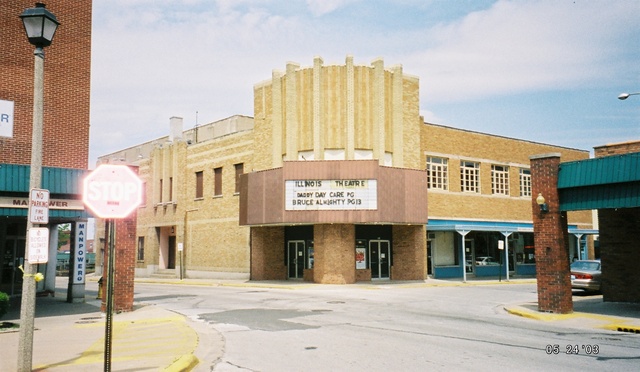 Originally the Grand Opera House of 1892 stood on this site. It began screening movies in the 1920’s and was renamed Illinois Theatre in 1927. Operated by Fox Theatres Corporation it was closed in early-1938 and was demolished.

A new Illinois Theatre designed by the Boller Brothers was built and opened on March 9. 1939 with Lorretta Young in “Wife, Husband and Friend”. Again it was managed by Fox Theatres Corp.

In the 1970’s it was taken over by Kerasotes Theatre and was twinned. It was being operated by an independent operator in 2008, screening first-run features. A third screen was created in the former balcony, and the cinema is equipped with digital projection. In 2015 it was converted into a 5-screen theatre. In December 2018 it was taken over by Eisentraut Theatre

Bryan, what you’ve sent is a photo of the recently-closed Illinois Theater in Macomb, Illinois. It sure hasn’t changed much!

I saw my first movie at the Illinois in 1981 (The re-release of Star Wars). It had just been twinned at that point and the marquee was covered with some very ugly brown siding (though a few years ago you were able to see a section of the marquee when a storm ripped off some of the siding. Other than being twinned the inside appears to be close to original. It still has the tile laid out front confirming that it was a Fox theater at one time. I’ll provide some pictures at a later date.

As noted above, from 1892 to 1938, the site of this theater was occupied by the Grand Opera House. That theater is listed under Jacksonville IL in the 1897-98 edition of the Julius Cahn Official Theatrical Guide. H.M. Ravenscroft was the Mgr; the theater had 1,219 seats and was on the ground floor. It had both gas and electric illumination; ticket prices ranged from 25 cents to $1. The proscenium opening was 33 feet wide X 30 feet high, and the stage was 43 feet deep. There were 14 members of the house orchestra. There were 3 daily newspapers, the Journal, the Courier, and the News. Hotels for show folk were the Dunlap House, the Pacific and the Park hotels. The principle railroad was the Chicago & Alton. The 1897 population of Jacksonville was 14,000.

This former Fox house opened on March 9th, 1939 with the opening night feature “Wife Husband and Friend” from MGM.

The new owner of the Illinois put a lot of heart, soul, and cash into the building. He reopened the long-closed balcony as a third screen shortly after taking over. Digital projection has been added, and the restrooms got a long-needed makeover.