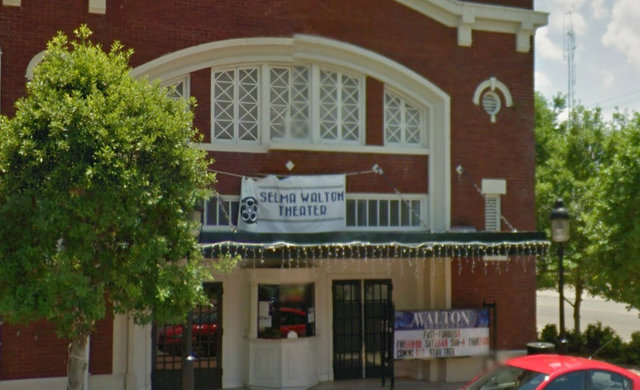 The Walton Theatre opened August 10, 1910. In 1928, the theatre was considered a “B” movie house. But, in 1932 it garnered national attention when it was converted into an “all-talking” picture show. The renovation included the installation of a new Western Electric sound system, redesigned foyer, 600 new seats, carpeting, drapes and lighting effects, making it one of “the most attractive in this section of the country”, quoted the Selma Times-Journal.

During the late-1940’s, in addition to running feature films and hosting vaudeville shows, the Walton Theatre staged local “Amateur Nights”. A typical weekend night at the Walton Theatre would include a feature movie, local talent acts, newsreels and a short comedy.

By the 1970’s, the Walton Theater was closed and on the verge of crumbling. In the early-1980’s Selmian’s took up the cause of the Walton Theatre and launched a project to restore and enlarge the facility. After five years of planning and construction, and at a cost of over a $1 million, the new Walton Theatre opened in May, 1985 as a performing arts center. James Hatcher, an Alabama fine arts expert, upon seeing the completed project stated, “It’s a jewel box”… and “This is one of the finest arts centers I’ve ever seen”.

The Walton Theatre renovation project was spearheaded by local residents Larry Striplin and singer Anita Bryant. The Performing Arts Center was designed to house theater productions and movies. The first event held in the new theater was the children’s movie “Blackbeard’s Ghost”. The theatre stopped showing features films in the 1990’s.

In October 2011, the City of Selma partnered with J. David & Sharon Jackson to reopen the Walton Theatre as a first-run movie theater. New state-of-the-art digital projection and sound systems were installed and January 13, 2012, the Selma Walton Theater held its Grand Opening. The feature film was “Mission Impossible IV” starring Tom Cruise. It was closed in December 2013, but there are hope that the city owned building will find a new operator. In January 2015, the theatre was temporarily re-opened for the citizens of Selma to be allowed to see free screenings of the highly rated movie “Selma” which tells the story of the Selma marches in 1965. It continues to operate in 2020.

The Walton Theatre had opened on August 10, according to the November 14, 1910, issue of The Moving Picture World. The original seating capacity was 500, 122 of them being in the balcony, and the rows were thirty-six inches apart, which was very generous spacing for a theater of that period. 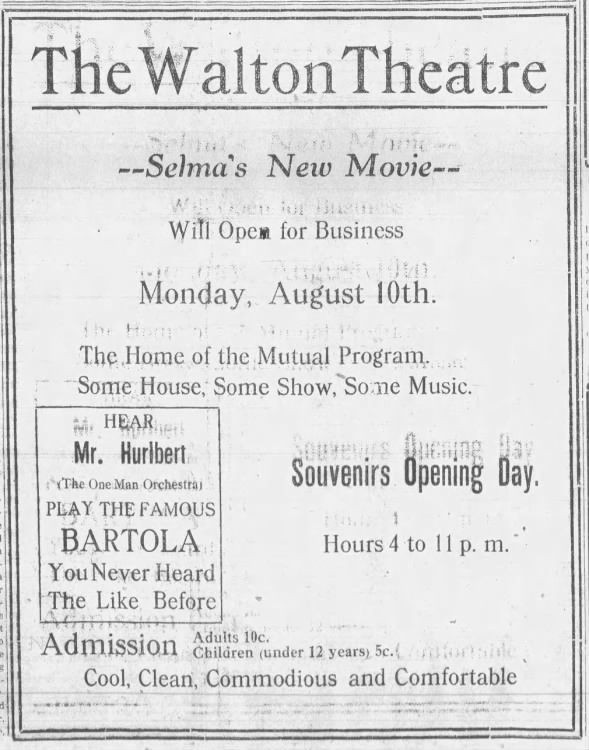 Should be listed as open with website – https://waltontheaterselma.org/home Was a new build venue launching August 10, 1914. The reference to the Moving Picture World article above is incorrect – the issue is dated November 14, 1914, p. 1917. The local newspaper articles confirm the date.

After “Selma” screened in earl 2015, a decision was made to reopen the historic venue beginning regularly on March 20, 2015 with the film, “Insurgent” and continuing to the 2020s.