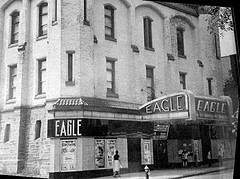 The Eagle Theatre was opened around August 1926 when a Wurlizer 3 ranks organ was installed. It was rebuilt as the New Eagle Theatre which opened on January 5, 1938. The feature film was Ronald Colman in “The Prisoner of Zenda” & Bobby Breen in “Make a Wish”. The New Eagle Theatre is still listed in the 1957 Film Daily Yearbook with 830 seats.

Not only is the Eagle Theatre gone, the block of Hudson Avenue on which it was located is no longer a street. A glimpse of the Eagle Theatre’s modest marquee can be had in this photo from October 3, 1933.

The Eagle Theatre was in operation by 1928, when it was mentioned in the June 9 issue of Exhibitors Herald and Moving Picture World. The house was rebuilt in 1938. The January 10 issue of Motion Picture Daily noted that Abraham Stone had reopened the Eagle Theatre in Albany after a $40,000 renovation.

This pdf has a page of the Albany daily The Knickerbocker News of January 5, 1938, which is full of ads congratulating the New Eagle Theatre on its opening. One of the ads is from architect Colin Cobban, so he must have designed the New Eagle.

The Wurlitzer records show a tiny 3-rank organ sold to the Eagle in August 1926. For an 800+ seat theatre that must have been about as effective as a – well, let’s not get into vulgarities. It does push the opening date back a little. The castellated architectural style popular at the turn of the 19th to 20th centuries and the name Eagle, suggest the possibility that this was a fraternal hall re-purposed into a commercial theatre. Maybe?