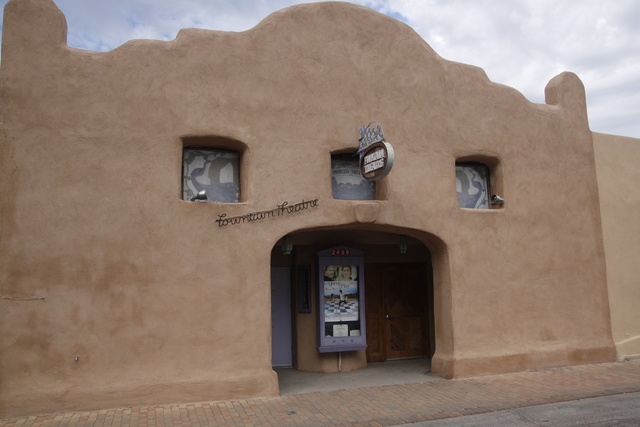 Opened in 1905, the Fountain Theatre is the oldest movie theater in the state of New Mexico.

It lies in the historic district of Old Mesilla, located on the same block as the jail from which Billy the Kid escaped on April 30, 1881.

The history section of the Fountain’s web site says that it is the “…only continuously-operating movie theatre in the state” of New Mexico. (I wonder if they meant to say “oldest” rather than “only?”) If so, then, as this theatre has been operating since 1905, it would almost certainly be the oldest continuously operating movie theatre in the United States.

The Fountain has 120 seats. The style is adobe, turn of the century (it was built in 1905) with hand-painted murals on the walls. It features 35mm, 16mm, and video projection with Dolby Digital sound on 35mm films. It was once the home of the Las Cruces Community Theater and the Desert Playwrights, interspersing live stage with motion pictures. The last few years (since 1995) have been strictly films with no live stage or music productions.

Here is another photo:
http://tinyurl.com/jf6d3

The theater seems to be in constant peril. Every two years the lease expires and the newspaper runs stories of it being on the verge of being bought out by a neighboring boutique or winery. Luckily this hasn’t happened…yet.

Boxoffice, Feb. 14, 1948: “Arthur J. Fountain is reopening the Fountain at Mesilla, N. M. While he was in the armed forces he left the house closed. He uses mainly Spanish and Mexican product.”