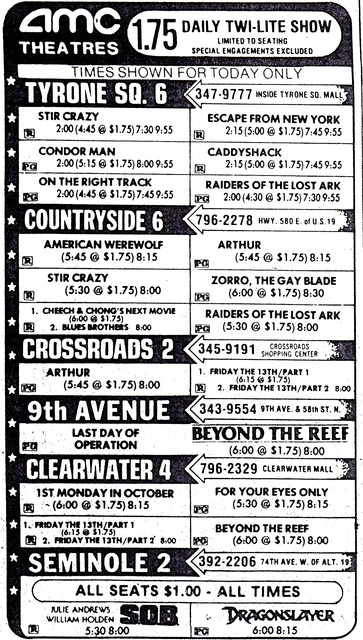 The former Tyrone Theatre was St. Petersburg’s first new theatre in over 35 years. This 932-seat theatre was constructed by Ware Construction Company of Tampa. The owner was Quarto Corporation of Florida. The Tyrone Theatre was designed and decorated to the plans of architect Rocker Salzer. Mr. Salzer was also vice-president of Quarto Corporation. Acting as architect and decorator, Mr. Salzer stated, “It was quite a responsibility but I had experience in redoing the old Roxy Theater and comments so far on the Tyrone Theatre have been very complimentary".

This $100,000 theatre was located in the Tyrone Shopping Center at 9th Avenue North at 58th Street North. The 11,000-square-foot one-story building had a 28-foot high ceiling. The interior was decorated with a green, gold, and antique white color scheme throughout. The lobby featured a 20-foot curved refreshment counter of antique white Formica and gold molding with mirrors on the back wall. A huge gold chandelier that hung from the ceiling dominated the lobby. Flooring was vinyl tile with chartreuse carpeting extending into the auditorium and down each aisle.

The auditorium walls were lined with gold damask curtains in vertical folds. Auditorium lighting was on a dimmer system. There were 34 rows of green and beige Heywood-Wakefield seats with rows spaced 40 inches apart. The Technikote screen measured 42½’ wide by 18½’ high. An automated device controlled screen masking. The booth was equipped with Century model projectors with transistorized sound and Altec speakers.

The grand opening took place on July 8, 1965. In attendance at the ceremony were top city officials from St. Petersburg, officers of Quarto Corporation, and representatives of the motion picture industry including local branch managers from MGM, 20th Century Fox, and United Artists. The film selected as the opening attraction was the new comedy, “The Art of Love” with James Garner, Dick Van Dyke, Elke Sommer, and Angie Dickinson.

The Tyrone Theatre continued to operate as a first-run house under Quarto Corporation through September 1969. Wometco took over ownership in October 1969 and continued initially under a first-run policy, and later as a double-feature dollar house. By the early-1970’s it had reverted to an X-Rated adult theatre under an independent exhibitor. In January 1976 it fell under the Wometco banner once again playing second-run double features for $1.00 admission.

In December 1979 AMC acquired ownership and the name was changed to the 9th Avenue Theatre. The policy reverted back to first-run films at $1.50 admission. The theatre reopened on December 21, 1979, with “Roller Boogie”. The last day of operation was September 17, 1981 with “Beyond the Reef” as the final attraction.

It’s interesting to note that AMC did not renovate or divide the auditorium into multiple theatres which was the industry norm at the time. The theatre remained a 932-seat single screen house until closing nearly two years later.

The building is still standing today as a Winn Dixie Supermarket.

Just posted a review and ad for “Panorama Blue” an x-rated adult film supposedly shot in 70mm that played in 1974.