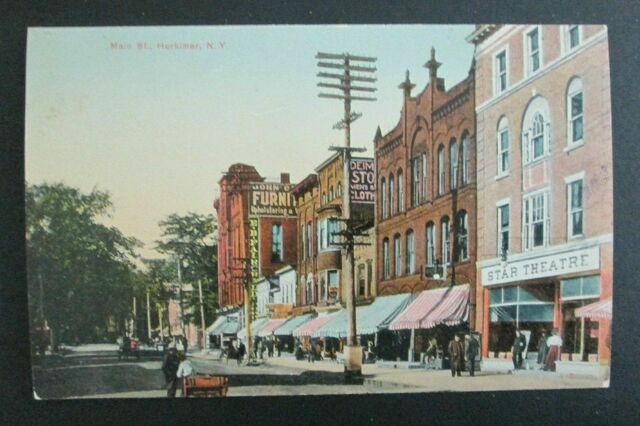 The Star Theatre in Herkimer was located along a row of retail stores and buildings along N. Main Street. It was a plain unremarkable four story building with a flat façade. The entrance located at street level was mostly glassed in with a small setback which lead to the doors and provided a small amount of shelter to theatre patrons. Above the entrance “STAR THEATRE” was displayed in black on white. The Star Theatre was opened on June 21, 1909 with vaudeville and moving pictures.

The July 3, 1909 issue of The New York Dramatic Mirror said that the new Star Theatre in Herkimer had opened on June 21 with two acts of vaudeville, moving pictures, and illustrated songs. The type on the page is smudged, but I believe it says the house had 500 seats. A book called A Companion to Early Cinema says that the Star was a storefront conversion. It was not one of the three theatres listed at Herkimer in the 1914-1915 American Motion Picture Directory, but might only have been overlooked.

The Star was at 104 N. Main Street, in a building that now houses a hardware store.