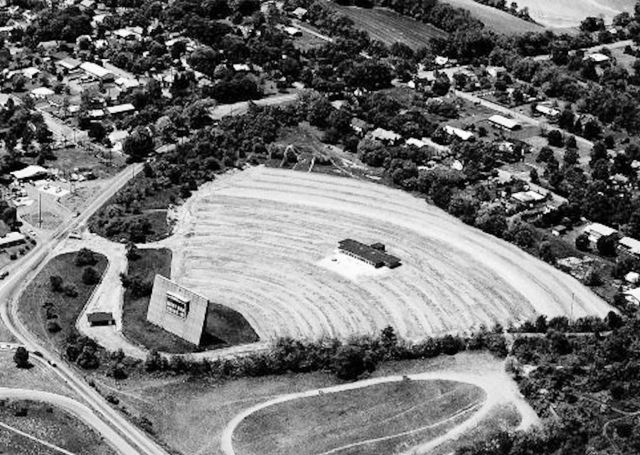 E.M. Loew Theatres opened he West End Drive-In on October 8, 1954 with Doris Day in “Lullabye of Broadway” and Alan Ladd in “Branded”. By 1955 it was operated by Sol Schocker. In the early-1970’s it was taken over by United Artists and was closed in 1976. It was demolished and there is now a car dealership on the site.

Two Drive-Ins were built in the Allentown area in the late 1940s after World War II. The Boulevard was opened on Union Boulevard in East Allentown; the West End off the 15th Street Exit of the Leigh Valley Throughway (Route 22).

Operated successfully for many summers. Usually open between May and October. Had just simple pole cord speakers you hung on the car window. No heaters so that limited the season to the warmer months. Had nightly shows at dusk during the week. 2d shows on Friday and Saturday nights Concession stand with all the normal drive-in fare for food.

Closed in the 1970s and redeveloped. Now Rothrock Nissan

E. M. Loew’s Theatre Circuit Inc. of Boston purchased land in 1954 to build the West End Drive-In, to open in late summer at a cost of $200,000 at 1501 Mauch Chunk Rd. Picketers delayed the progress and the theater opened in October of 1954 filling its 1,000 car capacity with another 200 cars accommodated in additional parking area. Allentown’s mayor Brighton C. Diefenderfer cut the ribbon along with E.M. Loew and ozoner manager John J. Scully Jr. No evidence to support late 1940s opening in aerial shots until 1954. The drive-in was demolished and as of the mid-2010s the land was occupied by three car dealers.

This opened on October 8th, 1954 with the world’s largest CinemaScope screen. Grand opening ad in the photo section and below.

This Grand Opening note must be what dallasmovietheaters was referencing in his helpful post. Billboard, Nov. 13, 1954: “Boasting a 122 by 72-foot screen which the management believes to be the largest in the country, the West End Drive-In near Allentown, Pa., opened recently, filled to almost its 1,000-car capacity. There is plenty of space to accommodate another 200 cars. The ribbon officially marking the opening of the drive-in was cut by Allentown’s mayor, Brighton C. Diefenderfer. E. M. Loew, president, E. M. Loew Theaters, was in for the opening. John J. Scully Jr., a partner with E. M. Loew, is managing the West End.”

In The Early 1970s, The West End Drive-In Was Taken Over By United Artists Circuit According To The Morning Call Of Allentown. It Is Closed In 1976, And Was Demolished In 1979 To Make Way For (What Appears To Sit Today) A Car Dealership, Now Between Rothrock Nissan And Rothrock Chrysler, Dodge, Jeep And RAM Including Its Motor Sales.

As everyone has already stated after the Drive in theater closed the Rothrock family acquired property and built there auto dealership on it originally Rothrock Datsun. The founder aquired the land by showing a model of the dealership building with a removable roof that showed that of he failed the building could be sold to Hess’s as retail space. https://www.rothrock.com/our-history.html