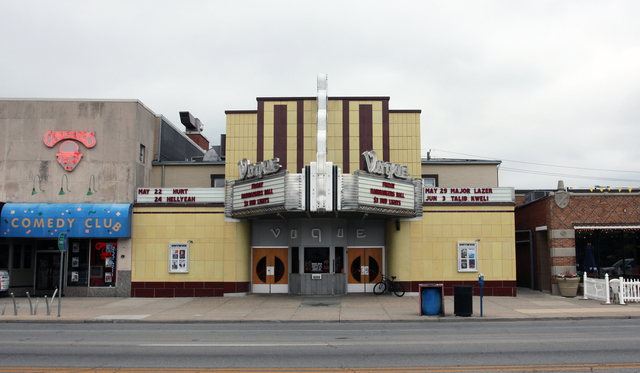 Opened on June 18, 1938 and originally seating 767, the Art Moderne style Vogue Theatre in Indianapolis' now-trendy Broad Ripple neighborhood hasn’t been a movie house since the 1970’s, but is still packing them in in its current role, as one of the city’s most popular nightclubs, the Vogue.

The exterior still retains its old-fashioned movie house appearance, complete with a large neon marquee, but inside, it has been almost entirely made over.

The club also hosts live performances by big-name artists such as the Red Hot Chili Peppers, Tori Amos, and Todd Rundgren, as well as local bands. Most nights, however, you’ll most likely be hearing a DJ spinning everything from house to techno to retro disco to world music on the very packed dance floor.

Wow, Dr. Bop (& The Headliners) played there? They were a riot. Had their own bartender on stage with them. They’d bat pitchers of beer out over/on the audience with their guitars. Indoors at a theatre must have been a mess.
They performed on a rubber mat. Insured by Lloyds Of London I was told. They lived in Chicago for a while in the `80’s. Played many a street fair. They had rotating female back-up singers called the “Melendez Sisters.” A gal I went to grade school with turned up as one once. Her dad was a folk musician too as I recall. Thanks for the pics.

Here is another 1985 photo:
http://tinyurl.com/nzoopw

Newspaper photo from 1948 aded. Though it implies 1938. Courtesy of Steven Ross.