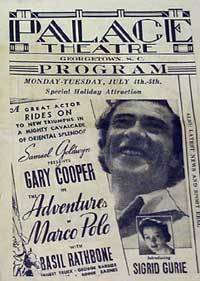 Built in 1936, the Palace Theatre was owned by Carroll and Morris Abrams. The 350 seat theatre lasted through at least 1968. The building now houses the First Citizens Bank.

Any additional information on the Palace Theatre would be appreciated.

My name is Andy Smalls, but the people in Knoxville TN know me as Marshal Andy or the Knoxville Cowboy. I was born in 1929 in Georgetown, SC & my childhood was encompassed in the one block area between Broad Street & Screven Street which was the main part of the downtown area on the waterfront. On this one block were the Palace & Strand Theaters which were to play a huge part in my childhood & shape my life in more ways than I could ever imagine.

The Palace theater was built by Morris Abrams & opened in 1936. I first attended the Palace theater in the fall of 1936 seeing a Charles Starrett movie, or what we would call a B western today. On Saturdays, the Palace would show a serial(these would include Buck Rogers, Our Gang comedies & Fighting with Kit Carson), cartoons(these would include Mickey Mouse, Tom & Jerry & of course, Bugs Bunny), selected short subject films & movie news before the main feature. These would play from 12:15pm to 11:00 pm & would feature western films starring Ken Maynard, Hoot Gibson, Buck Jones & Tim McCoy. As the 1930’s progressed, singing cowboys such as Gene Autry & Roy Rogers became increasingly popular. I remember seeing Tumbling Tumblweeds at the Palace in late 1936 or early 1937 & really enjoyed the singing cowboy westerns genre. With the Blue laws of the day in effect, the Palace wouldn’t open on Sundays until 1:15pm & then wouldn’t open back up until 9:15 at night.