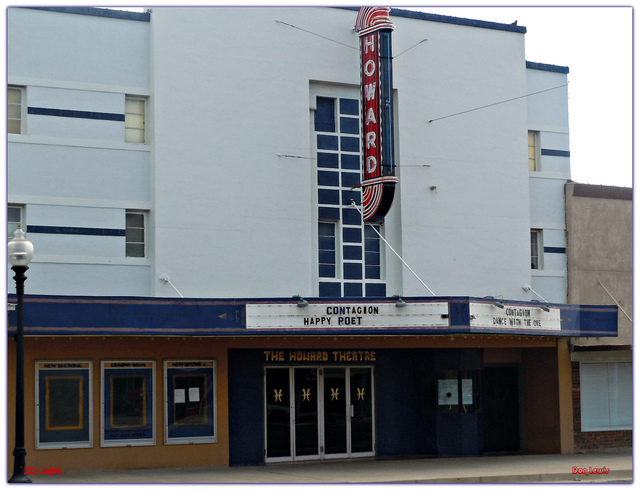 Originally, the name of this theatre was the Rita Theatre when it opened September 14, 1940. It showed all the B-run movies in town. It originally had 582 seats. The original Howard Theatre was the first run theatre.

In 1972, the theatre was twinned into its present configuration by adding a stage and wall at the end of the balcony creating an upstairs and downstairs auditorium.

In 1990, United Artists sold the theatre back to F. Rhea Cromwell, a descendant of Howard Bland. In turn, the Cromwells' have leased the theatre out to several different individuals until 1999, when the current owner purchased the building outright from the Cromwells'.

Pretty cool but didn’t care for the upstairs show. There was a loud movie downstairs and the volume wasn’t loud enough to drown it out. Prices are great though. I didn’t peek into the downstairs but plan to see the next show there. Overall very nice feel.

A 1994 photo of the Howard Theater in Taylor.

From 2011 a photo of the Howard in Taylor Texas.

The Howard in Taylor went digital both upstairs and down. This happened the weekend following the day I took the pix on June 19, 2003. Here’s a few photos of the booths and equipment and of the auditoriums.

1950’s photo as the Rita Theatre added to Photos Section. Then and Now fade including the same in link below. Copy and paste to view.

Circa 1955 photo added courtesy of the Traces Of Texas Facebook page.

The Howard Theatre is closed.

The Howard Theatre has announced it will re-open on November 19, 2021. Glad to see it’s return.