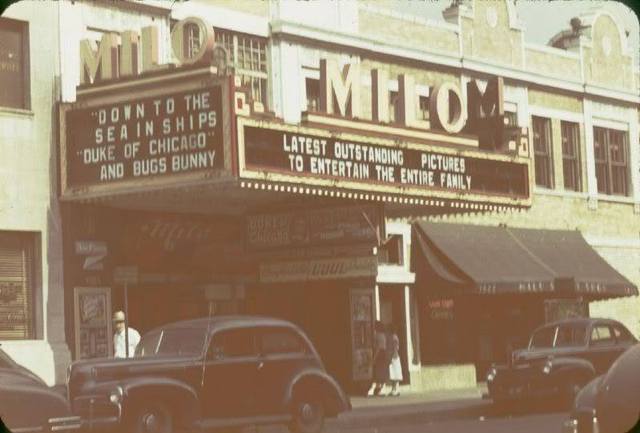 Built in 1925 as the Milo, and located in the Pilsen neighborhood of Chicago, at Loomis Street at Blue Island Avenue.

It was designed in the Spanish Colonial style, an uncommon style in Chicago for movie houses.

As the neighborhood changed from one founded by Bohemian immigrants to mostly Latino, as it remains today, the Milo’s name also changed, first from the Villa Theater, then to its Spanish translation, Teatro Villa, after it became a Spanish-language movie house.

The theater operated at least into the 70s. The site of the Villa is now a parking lot.

The theatre has been closed since the late 60’s? They never did anything with it?

A strange death, perhaps murder, though more probably a suicide, took place at the Milo, as this news item details:

Maxwell street police last night were investigating the death of Miss Clara Sirigas, 23 years old, 3611 Hemlock street, Indiana Harbor. The young woman, who police say is a graduate of the University of Chicago, called to see her uncle, John Manta, owner of the Milo theater, 1821 South Loomis street. He was at the theater, and she went to the women’s lounge, from which she failed to return. She was found shot thru the heart, a small pistol at her side.

FOUND GUILTY OF ROBBERY, 3 GET YEAR TO LIFE

Three youths were convicted by a jury yesterday of robbery with a gun, and sentenced immediately by Judge Benjamin P. Epstein, in the Criminal court, to one year to life in the state penitentiary at Joliet. They were James Arido, alias Muzzo, Peter Volpe, Tony Pizzello, all 19 years old and Philip Colonero, 18 years old. All had previous criminal records.Three employes of the Milo theater, 1821 South Loomis street, identified the first three as the bandits who robbed the theater box office of $65 on June 30. Although they were unable to identify Colonero, driver of the bandit car, who waited at the curb, he was implicated in a confession made by all four to Assistant State’s Attorneys Irwin Clorfene and Frank Donoghue. They were arrested July 7 on suspicion, and were subsequently identifed in three other robberies. Judge Epstein overruled a motion for a new trial.

An item in the November 28, 1925, issue of Motion Picture News listed the Milo Theatre as one of three houses recently opened that had been designed by R. Levine & Co.

From the above excerpt regarding the robbery, my grandfather was theg driver of the “bandit” car. It was something that the grandchildren didn’t learn about until years and years later. This escapade was the end to his life of crime, he found my grandmother, settled down, and raised a family. I just happened across this little piece of history, and it brought back so many memories.