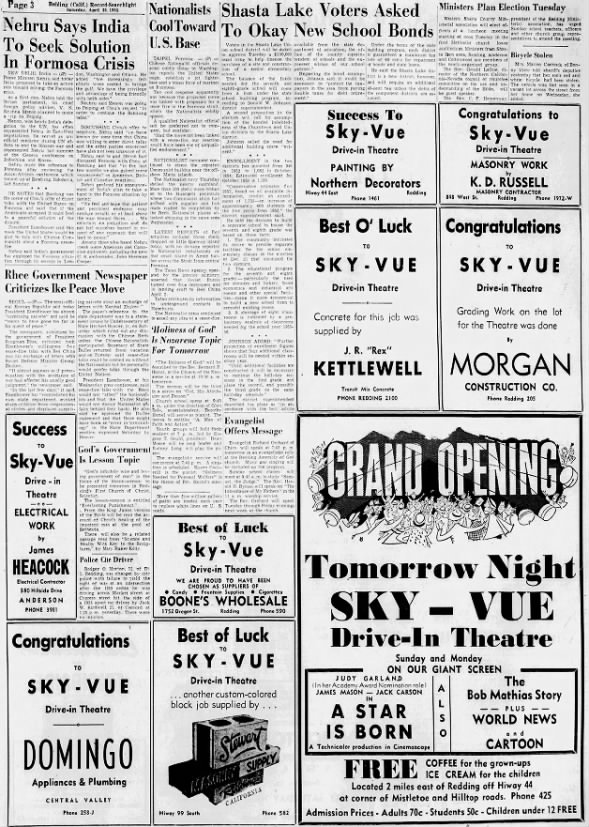 The Sky Vue’s first appearance in the Motion Picture Almanac’s drive-in lists was the 1957 edition. The 1955-56 Theatre Catalog omitted the Sky Vue. The photo kennerado mentioned was taken on Nov. 2, 1955, and I wonder whether the drive-in was still under construction. The back two rows (as shown in later aerials) are unfinished and there’s an odd split just south of the concession building.

On the other hand the Shasta Historical Society’s “Covered Wagon,” published in 2005, quotes De Wayne Smith as saying it opened in 1955 and had a 40x60-foot screen. Aubrey DeWayne Smith’s obituary (May 12, 2011) said, “In 1955 his family moved from Medford, OR and together they opened Redding’s first (sic) drive in theater, the Skyvue Drive-In.” (Overlooking the Starlight, which opened years earlier.) And we know for sure that it was open by November 1956, when it was buglarized per a note reprinted 50 years later in the Redding Record Searchlight.

Boxoffice, March 22, 1965: “The Robert Lippert organization is in the midst of remodeling a number of its properties (including) … the Sky-Vue Drive-In, Redding”

In March 1981, the town approved a lot-split to ease the sale of the drive-in. The Sky Vue’s last appearance in the MPA drive-in list was in 1984.

It was open as early as 1955 because its there in an aerial photo from that year.

In 1981 a group of us left our prom to go to the drive in as we knew it was closing, they were showing “The Incredible Shrinking Woman” with Lily Tomlin. The prom was across the street at the Holiday Inn. It was funny to see guys in tuxedos and girls in gowns walking around!