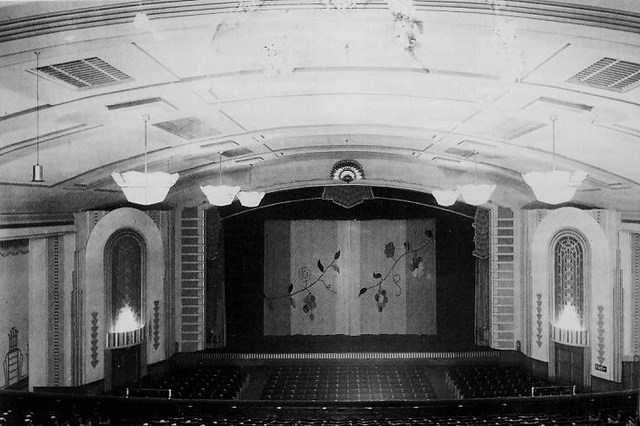 Located in the Bank Hall district in the north of Liverpool. The Commodore Picture House was opened on 22nd December 1930 with George Arlis in “Disraeli”. It was a large suburban cinema, and had seating provided for 1,306 in the stalls and 600 in the circle. The proscenium was 54 feet wide, one of the largest in Liverpool. There was also a large stage and dressing rooms for live entertainment use. It was built for and operated by the independent Regent Enterprise Ltd.

The Commodore Picture House was taken over by the Associated British Cinemas(ABC) chain on 4th April 1931. They operated the cinema for the remainder of its cinematic life, when it was closed on 30th November 1968 with “How to Seduce a Playboy” and “Virgin Youth.

It was converted into a Mecca Bingo Club, later operating as an EMI Bingo Club. This was closed in January 1982, and building was left empty for a year. It was taken over by Coyne Brothers funeral directors. In 1993, it became a car spare parts depot named Commodore Car Sales, but this closed in 1995. The building then lay empty and unused until the mid-2000’s, when it was taken over by Armadillo Storage, and converted into a storage facility.

PS. When it sold car spare parts it was actually called “Commadore”!