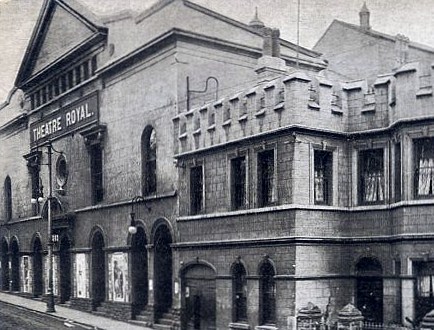 Located in the town of Merthyr Tydfil, Mid-Glamorganshire, south Wales. The Theatre Royal and Opera House was opened in 1891 with 1,500 seats. It was designed by local Merthyr Tydfil architect T.C. Wakeling in a Neo-Classical style. It was screening films as part of its programme from the early-1900’s. It had a 28 feet wide proscenium and a 22 feet deep stage and six dressing rooms.

It was taken over by the Associated British Cinemas(ABC) chain in 1932, and was given an Art Deco style makeover inside the auditorium. It was leased to the Regent Theatres chain (a subsidiary of ABC) in May 1933 until 1935, when it returned to ABC management.

It was taken over by an independent operator in 1939. CinemaScope was fitted in 1955 and a new 38 feet wide proscenium was installed. The Theatre Royal was closed in the late-1960’s and was converted into a bingo club. This had closed by August 2009, and the building is currently unused.

The Theatre Royal is a Grade II Listed building.