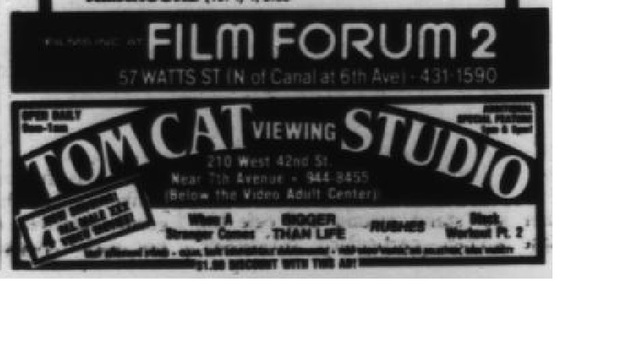 Located just to the east of the New Amsterdam Theatre on W. 42nd Street. The Frisco Gay Theatre was operating around 1978. It later became the Tomcat Viewing Studio, and then the Rick Nielson Screening Room.

Now demolished, an entrance to the Times Square 42nd Street Subway station is at this location.

I recall another Rick Nelson viewing room that was located in one of the bookshops. You had to go to the back and there was a stair to go downstairs. You paid 5 bucks by inserting into a machine and in you went. It was a small viewing room

If you check the photo section you will find an ad posted by Woody_London that shows this as the Rick “NIELSON”, not “NELSON”. I checked other ads in the Village Voice from 1989 and can confirm they have the same spelling.