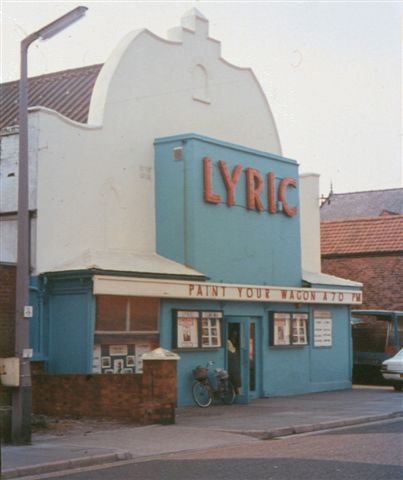 Located in the Lincolnshire seaside town of Mablethorpe. The Electric Palace Cinema was opened in 1926. Seating was provided for 380 in stalls and a small balcony. In May 1930, it was equipped with a British Acoustic(BA) sound system and was renamed Lyric Cinema, re-opening with “The Rogue Song” on 21st May 1930.

The Lyric Cinema suffered damage in the winter of 1953 when sea water flooded the town. Repairs were eventually carried out and it was equipped with CinemaScope, re-opening in May 1955 with Tony Curtis in “The Black Shield of Falworth”. By 1970, it was operating as a cinema, with part time bingo on certain evenings. Closing as a cinema in around March 1973, it became a full time bingo club, which operated into the mid-2000’s.

By November 2008, it had been converted into a P & Q DIY hardware store.

It was a very attractive cinema- presentation wise. Apart from lobby cards giving you a taste of what you were going to see, there would always be a glossy photograph of the star of the film. Furthermore, a booklet was available for each month showing a photograph of the cinema on the front in a different colour each time.I found this very impressive. I was only a young boy living in Sutton on Sea and it was the local cinema in the area at the time.

They put on some great double bills that everyone could enjoy, and very good value for money it was too. I thoroughly enjoyed the comedy and pop music double bills i saw there. That i will mention.

Some of the presentations had been made over a decade ago, whilst some were current releases of the time. There was a red lighted clock on the left hand side of the screen.

Yes, the age of the film varied that was shown there some about 12 years old i’ve known, but nothing wrong with that. You would get a coming soon presentation with a black and white still of the star advertised as you would when the film was showing which i found very impressive.

The Lyric was originally the St Georges Theatre and continued as a theatre up until the outbreak of world war two. My late mother and her sister appeared there in 1938 in Joy Parade, I still have the programme for that, it was a fully professional show from London and my family were The Swan Sisters. The Henshall family continued to run the Lyric and my mother then retired from the stage and settled in Mablethorpe often worked for Madge the owner, her connection with the building went into its time as a bingo hall where she called the games. Such a shame that it could not carry on as a entertainment venue it was cosy, friendly and a great place for us kids in the 50s to go to and as we grew up it had those wonderful double seats at the rear of the balcony