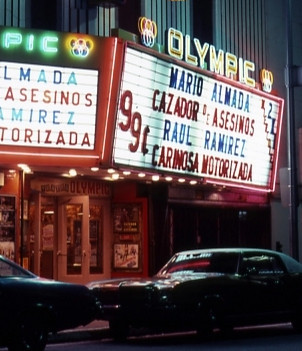 The Bard’s Eighth Street Theatre is located on the north side of W. 8th Street between S. Broadway and S. Hill Street, opposite the huge May Company department store. It was built for the L. Lou Bard chain Far West Theatres Inc. Architect Lewis A. Smith remodeled a restaurant into this last theatre added to showman Lou Bard’s theatre chain. The interior featured vaguely Chinese decor and had 600 seats.

The opening feature on April 2, 1927 was the premiere showing of Universal’s farce comedy “Oh Baby”, starring Madge Kennedy and with Creighton Hale in the leading male role. It was equipped with a Wurlitzer organ, which was opened by organist Peggy Bower.

In 1932 the theatre was renamed Olympic Theatre to commemorate Los Angeles hosting the Olympic Games that year. The theatre was remodeled in 1942 by architect Charles O. Matcham.

During the later years Metropolitan Theatres ran this theatre as a Spanish language house. The theatre itself appears in movies including “The Omega Man”(1971) starring Charlton Heston.

The Olympic Theatre was closed in the summer of 1986 by Metropolitan Theatres to enable wall stengthening to withstand earthquake shocks, but it never reopened. By 2004, the facade and marquee had been repaired and by then, the interior was used for storage and had been stripped back to its four walls and painted white, with the floor leveled. The ceiling retained a large oval area and the organ screens were still intact. Two stairways leading to the auditorium from the lobby were cemented to make ramps.

In 2007, the building was reopened as a shop for chandeliers and French rococo furniture, with much of the remaining original interior repainted in white and gold. By 2017 it was a clothing store named COS.

An older vertical blade can be seen on the left in this late 30s photo, as well as the Tower further down on Broadway:
http://tinyurl.com/djv75x

Tower is the white building on the next block.

Here is another 1983 night photo:
http://tinyurl.com/lweadp

Here is a May 2010 night photograph I took of the Olympic: View link

Oh. They uncovered the old faÃ§ade.

Wow, love the recent photos, with the old facade exposed!

Here is 11 minutes of nighttime process footage from 1946 shot for the Rita Hayworth film “Down to Earth,” which shows the Olympic, the RKO Hill Street and several other theaters.

“Olympic Request Theatre” needs to be added to the list of previous names. Very odd name, I know, but I posted a couple picture of some old programs from this theatre when it had that name for reference. By the way, does anyone know the story of how it got that particular name?

As I indicated in my comment of October 8, 2006, in the 1940’s the Olympic operated as a “request” theatre' which meant that the programming of the theatre was determined by requests from patrons. As I recall from a personal visit, there was a desk in the lobby with a book in which one could enter suggestions for movies to be shown.