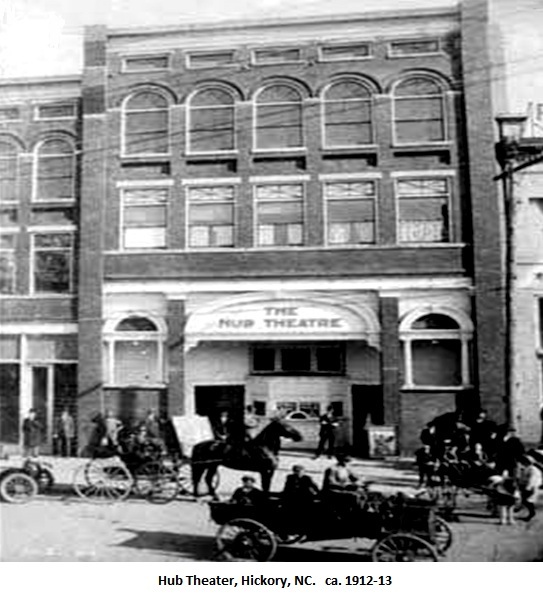 This theatre opened as the Hub Theatre on October 4, 1912. It was renamed the Rivoli Theatre in October 1923. It was initially part of Lee Enterprises. By 1935 it was operated by Hickory Amusement Co., followed by Colonial Theatres until its closing. The Rivoli/Hub Theatre could accomodate 400 patrons. The theatre closed in 1950.

I’m sure 1010 13th St. SW is a pre-1951 address. In that year, street names and addresses were changed throughout Hickory. 13th Street became 2nd Street, and I believe the 1000 block SW became either the 100 block SW or the 100 block NW (it would depend on whether the pre-1951 system had any numbers of less than 3 digits or not.) Even the way odd and even numbers were distributed might have changed in 1951, so I’m not sure if the modern address of the Rivoli’s location would be (approximately) 110 2nd St. or 109 2nd St.

Trade Avenue still exists, but appears as Trade Alley on some maps. Union Square exists, too, though altered somewhat. The Rivoli Theatre must have been in the building that now houses Wee Mount-N-Friend Frame shop, which is at 12 2nd Street NW.

Ken, the Hub theater definitely occupied the building at what is now 12 2nd Street NW. Here’s Google Street View, since we aren’t getting one at the top of the page right now.