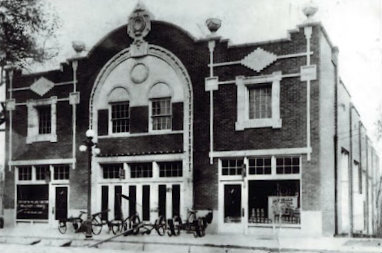 The Dunklin Theatre’s short and unsuccessful history began on November 18, 1914 when George Bartholomaeus and Frank E. Jones (later the county assessor) announced plans to build a new theatre at a cost of $12,000-$15,000. The contractor was Carl Franke. When completed, the yet-unnamed theatre had a southern frontage of fifty feet across and 22 feet in height and extended 120 feet to the north, towards Wears Creek. Its floor sloped one inch to one foot. It opened with the temporary name of Southside Theatre on May 29, 1915, screening “Damon and Pythias” in six reels, accompanied by an Orchestrion. The local St. Peter’s Orchestra with singer Mrs. Louis Rephlo entertained at intermissions. It was to be the theatre’s finest hour. Within weeks, management offered a $5.00 prize in a contest to select a permanent name for the new theatre. Four women tied with their identical entries of “Dunklin Theatre”, and each received $1.25.

But the Dunklin Theatre faced competition from the nearby Gem Theatre, Jefferson Theatre and Grand Theatre on High Street, and it was not adjacent to a streetcar line. That August Bartholomaeus sold his half-share to Frank Jones, and the ten-week-old theatre closed “for repairs”, to reopen on January 3, 1916. By that April, Jones also sold out, to Fulton, Missouri banker Starrel McCall for $30,000. Starell’s plans included the construction of a factory in the Dunklin’s basement. That never happened, but at that point in the important election year of 1916, the Dunklin Theatre was able to raise revenue as a venue for large meetings and rallies.

By November 1916 the Dunklin Theatre was sold again, to the International Theatre Company of Chicago with David Miller and Edward Mann as managers. Another grand reopening was held on Saturday, December 2, 1916, with “Prince of Graustark” on the screen plus vaudeville. A five-day-a-week film-and-vaudeville policy was tried, with children’s matinees in the afternoons, but by that Christmas the Dunklin Theatre had closed again, to reopen as a boxing arena on January 19, 1917 in a last-ditch effort to remain viable as an entertainment venue. Still, by that spring the Dunklin Theatre closed permanently after less than two years of struggling against inevitability. After three and a half years of vacancy, on July 14, 1920 the abandoned Dunklin Theatre building became a farm implement dealership, then a Budweiser beer distribution center, a restaurant, a novelty company, two churches, a grocery, a photography studio and an appliance store. It remains in retail use today, all its ornament long since removed.