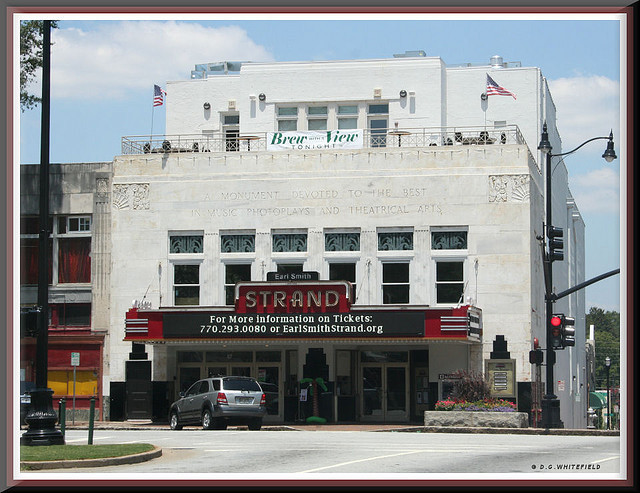 The theatre was in the early stages of preservation/restoration in the early 2000’s. It was reopened in 2009, as a live theatre, with some movie use, and is known as the Earl Smith Strand Theatre.

It’s The All Night Strut…sorry.

I have several atricles on this theatre with pictures from the Atlanta papers.

Speaking of Atlanta I saw that there is a new LOEWS HOTEL there open or about to open have you heard of it.Now back on topic send those articals to Nick to post if he has time,or if you have a scanner you could do them,my scanner does not work any more.

tislowes and MikeRogers: I see that both of you have provided your email addresses on your profile pages so you both have each others personal email address away from this site. Therefore, please chat about scanners, etc. via your emails rather than here on CT where members are asked to stay on the subject of theatres. Thanks my CT friends.

O.K. Chuck and Patsy,I hope you send this message to Everyone who gets off topic on these pages,you will be very busy.Have a good day.

The Strand has now been opened 2 and ½ years. We have had over 300 events each in 2009 and 2010. This includes our event space and the auditorium. Eve Grey, a local decorator has completely redone our lobby in Tuscan plaster, to include new door finishes, new counter fronts, and a copper paint on the main lobby ceiling. She is a gem and has really brought back a 30s look from the industrial grade work done by the contractor we hired. We now have a wonderful George Wright four manual theatre organ that was a gift to the Atlanta Chapter of ATOS from Tom Hamilton of Columbus, Ohio. This digital theatre organ replica has 24, 90 lb speaker cabinets placed strategically in the four pipe organ chambers that were constructed during our adaptive restortation. Our efforts to restore the pipe organ have fallen aside but this Allen sounds like a million dollars and the console sits on its own scissors lift that rises from the bottom of the orchesta pit 10ft to concert level. We will have had four silent feature length films and a silent comedy complilation (on July 17)plus the organ is used for private events and parties, weddings and for pre-shows of 17 films for our classic film series in 2011. We attempt to screen all of our films like a delux movie theatre would have done with an organ preshow to include sing-a-long, film introduction, raising the grand curtain as the film begins etc. etc. We are struggling to make ends meet during this economy and still owe 1.5 on our construction loan. Earl Reece the Executive Director is a tremendous person and works tirelessly for the theatre. Rentals are down so he is directing and producing several shows himself. Thanks-Ron Carter-Secretary to the Strand Board, Chairman of the Facilities Committee and House Organist.

The Friends of the Strand are engaged in a fund-raising drive to retire the theater’s renovation debt. Here is a related article that includes a video that shows the exterior and much of the interior.