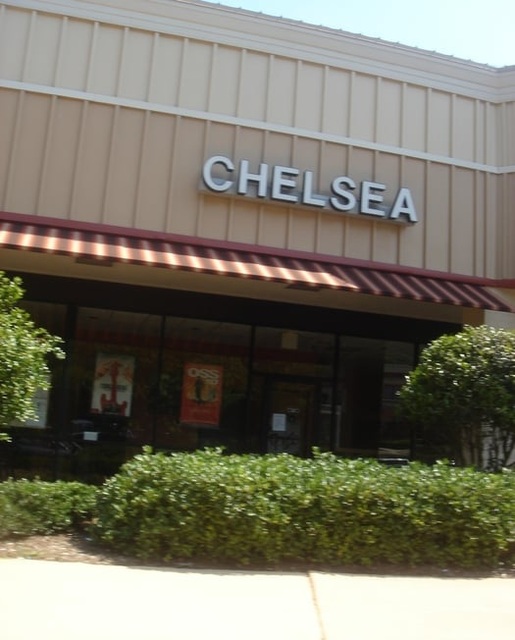 The Chelsea Theater was located on the opposite end of the Timberlyne Shopping Center off Weaver Dairy Road. It opened on November 16, 1990 as a twin cinema that operated as an independent under Bruce H. Stone, and specialized in showing first-run features as well as independent films and foreign releases.

By December 26, 1996 it expanded from two to three screens. Today,the Chelsea is the only arthouse cinema in all of Chapel Hill that shows a variety of films and different subjects.

Between this theatre and the Regal Timberlyne 6(which is across the street on Banks Drive),the two theatres have different audiences with the exception of the Chelsea being an art-house cinema that specializes in first-run independent features as well as foreign films and documentaries not to mention showing the occasional cult classic. The Chelsea has excellent customer service and brilliant projection,but the auditoriums are very small with one that is about the size of an elementary school classroom. I have seen a lot of good movies that have played here first-run at the Chelsea that attracts good crowds. I saw John Singleton’s “Boyz In The Hood” in 1991 when this was still a twin cinema. Other movies that played here were “Straight Out Of Brooklyn”,“Hedwig and the Angry Inch”,“Bully',"Sicko”,“Talk To Me”,“Menace II Society”,“Rosewood”,among others and the most recent was “Lee Daniels' The Butler” that is still bringing out capacity crowds for a theatre that size. Not only first-run features but cult favorites got the re-release here including “Caligula”,and “The Rocky Horror Picture Show”. I’m amazed that this theatre has outlasted two Downtown Chapel Hill theaters(with the exception of the Varsity Theatre Downtown which in 2009 transitioned from first-run features to showing second-run discount films and classics)…the Carolina which closed in 2005 on East Franklin Street and the Ram Triple which closed in 2000.

This theatre was owned and operated under Bruce H. Stone that opened on November 16,1990 as a two-screen independent cinema that had a seating capacity of 200(100 seats each in both auditoriums). The opening attractions for its grand premiere were on Screen 1 was Gerard Depardieu in “Too Beautiful For You”. On Screen 2 was the Oscar winning documentary titled “Berkeley In The Sixties”

On December 26,1996 this theatre expanded from two screens to three screens. The third auditorium had a seating capacity of 90,thus bringing the total number of seats the Chelsea has at 290. The opening features for its grand re-opening were on Screen 1 was “Ridicule” with Charles Berling and on Screen 2 was “Palookaville” with Vincent Gallo and William Forsythe. The Third Screen was a double feature with Kate Winslet in “Jude' and "Timothy Spall in Mike Leigh’s "Secrets and Lies”(that ended on December 31,1996). On January 1,1997 it opened with Jack Nicholson and Pierce Brosnan in “Mars Attacks!”(that recently played at the Carolina Theatre Downtown).

A lot of documentaries played here too as well including “Is Paris Burning?”.

I went to the Chelsea in 1999 to see “The Blair Witch Project” which played on two screens to capacity crowds. The service and projection was excellent since the movie was being shown in a very “tiny” auditorium,about the size of an classroom. Went back again in 2001 to see “Hedwig And the Angry Inch” in the same auditorium that was about the size of a classroom but the projection and quality were very good. But I had to experience seeing “Hedwig” again at a real movie theater(Raleigh’s Colony 1 & 2). I’m amazed that the Chelsea has outlasted three downtown Chapel Hill theaters(The Carolina Theatre, The Varsity 1 & 2,and the Ram Triple at NCNB Plaza)every since its official opening in 1990. A lot of first-run independent films played here as well as documentaries and foreign releases as well as vintage Hollywood classics. Movies like “The Kids Are Alright”,“Sicko”,“Submarine”,“Tiny Furniture”,to “Talk To Me”,“Boyz In The Hood”,“Menace II Society” and even “Dead Presidents” and “The Melvin Van Peebles Story” to hard-hitting documentaries like “Bully”,“Blackfish”,“Bowling for Columbine”,and “The Girl With The Dragon Tattoo” brought in capacity crowds for a cinema that size. Not to mention that it is very close to Regal’s Timberlyne 6(although the two theaters have different audiences)which is across the street from the Timberlyne Shopping Center off Banks Drive.

From NightHawk 1’s commentary: I saw “The Rocky Horror Picture Show” once as a special Halloween showing at the Chelsea. But if I wanted to see “Rocky Horror” in a larger theater,it will most likely will be at the Rialto in Raleigh since it has played as a midnight favorite for years(and it continues to draw HUGE crowds every weekend since they started playing it in 1987!) The Chelsea is one of two arthouse theaters in the Chapel Hill/Durham area(the other is Durham’s Carolina Theatre),and second closest arthouses would be Raleigh’s Rialto Theatre, The Colony 1 & 2,and the Raleigh Grande 16(which took the place of the Galaxy Cinemas which closed in November of 2012),and Carmike’s Park Place 16 in Morrisville(which is now a showplace for foreign releases and “Bollywood” films). Sometimes AMC’s Southpoint Mall Cinemas usually gets a lot of independent releases as well.

There are however two arthouses that are East of Raleigh,one is in Fayetteville at the Cameo Theatre(located in Downtown Fayetteville on Hay Street),and the other is Wilmington’s Thalian Hall Center(located in Downtown Wilmington at the intersection of Chestnut and North Front Street),and that is basically it. But if you’re looking for arthouses in the Washington,New Bern,Rocky Mount,as well as Morehead City,Elizabeth City,and Greenville… there are none since most of those cities don’t show cult films since the big chain theatres like Regal, UEC Premiere Theatres,and Carmike don’t show independent films nor foreign releases. They did once upon a time.

Third auditorium opened on December 26,1996,it expanded from two to three screens with the third auditorium seating 90. Total seating capacity was 290.